View source
watch 02:34
Fire Emblem Warriors: Three Hopes - The Loop
Do you like this video?
Play Sound
Not to be confused with the Reefer, a boat appearing in various Grand Theft Auto games.

The Western Reever is a custom motorcycle featured in Grand Theft Auto Online as part of The Contract update.

The bike is primarily based on the ARCH Method 143, with specific styling cues taken from the ARCH Nazaré motorcycle from Cyberpunk 2077, a custom variant of the 143 made for the game.

The bike features a front mudguard mounted on the black fork legs, while the upper area uses bulky fork tubes, a silver circular headlight housing with three vertical strips and a small windshield. There is a long panel that is finished in CFRP and bears silver "REEV" lettering in a vertical positioning, along with a "Race Generic" digital display derived from the Diabolus, two independent handlebars on either side of a black upper plate and mirror wings.

The main body is mainly composed of the fuel tank with what looks like black vertical side intakes on the front, black panels on the rear and a CFRP detail below, as well as a lower fairing with black details on its front and underside. The engine bay is rather exposed and reveals two exhaust pipes coming from each cylinder block, with the frontal one seen on the right-hand side and the rear one on the left-hand side. The rearmost sections of the engine bay mount the corresponding foot pegs for the rider.

The rear section consists of a long rear fairing that house a long grey seat for the rider, a black detail with a license plate on the underside and a single red tail lamp on the end that is surrounded by a silver detail, while two wide exhaust mufflers are seen with a CFRP detail around and silver tips bearing filters. The rear wheel is connected by a single black swingarm on the left-hand side that mounts the rear mudguard and is supported by a single suspension shock/spring. The same suspension components are seen passing through a rear frame with a large opening, while the chain drive and sprocket are seen on the left-hand side.

The primary color of the bike is applied on the bodywork and the bolts of the stock rims, while the secondary color is applied on the outer tips of the mudguards and the surrounding of the stock rims. It uses a set of plain, concave rims fitted with Fukaru medium-profile tires. The rims also support a dedicated wheel color, which can be painted by selecting a custom rear wheel, applying a color and change back to the stock wheel (as it won't reset to the default alloy color). In addition, the stock rims give a slightly darker tint/shade to the wheel color and the secondary color.

The bike is powered by a pushrod V-Twin engine evidenced by the details on the cylinder blocks and is coupled to a 5-speed gearbox. Its engine sound is derived from the Esskey, appearing to be a lower-pitched variation of the sound used on bikes such as the BF400 and the Manchez.

Installing any "Backrest" modification will increase its traction slightly, in the same way as a spoiler. 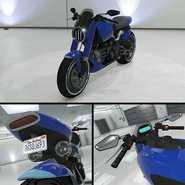 The Reever on Legendary Motorsport.

The Reever in the cinematic preview on Rockstar Games Social Club. 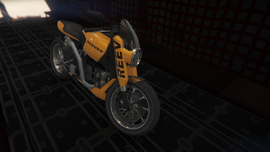 A Reever parked in the Agency garage. (Rear quarter view)