View source
Not to be confused with the Reever, a custom motorcycle in Grand Theft Auto Online.

This article needs more images of:
Design gallery images and rear quarter images for all renditions of the Reefer.

Through the Grand Theft Auto series, the Reefer retained its general design as a large fishing boat, with its characteristic squared cab and a small radar on top.

In Grand Theft Auto IV, the Reefer assumes a completely new design, having a smaller cab and the radar is now placed on the crane's beams, as well as a plank on the front, which is exactly the same as the one found on the Orca in the movie Jaws.

In Grand Theft Auto: Chinatown Wars, however, the Reefer assumes a rather simple design, bearing a close resemblance to the pre-GTA IV renditions, specifically the GTA: SA version. 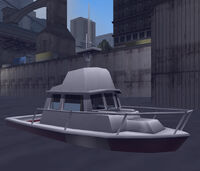 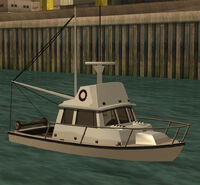 Based on a common shipping and fishing vessel, the Reefer is a slow yet durable fishing boat that can be obtained by a dock or on the water. In addition to being slow, it can hold only one passenger despite its large size. It is also a very poor choice of vehicle in a police chase because it will be quickly destroyed by police boats and lacks the speed or maneuverability to evade them.

The Reefer pretty much performs the same as in the 3D Universe, having slow speed, low acceleration and stiff controls. The Reefer is not recommended for Wanted Levels due to its slow speed, which makes it an easy target for enemy weapons. Is is, however, able to ram and flip other boats without causing too much trouble for the Reefer.

The "Fishing Boat", an earlier iteration of the Reefer in GTA III prior to the game's release. 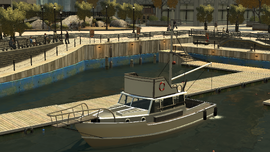 Full view of the Reefer in Grand Theft Auto IV, with its mast and boom in view. (Rear quarter view) 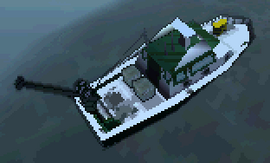 Salvage "So Near, Yet Sonar" variant in the Nintendo DS version.

In the mission Clocking Off, a unique black Reefer can be seen in the pier that Luis and his friends have to get there. It cannot be obtained, since if the player fails the mission, the game resets the player's location.

In So Near, Yet Sonar, a unique salvage Reefer fitted with a magnet crane is used. It is different in that it replaces the usual fishing crane by the aforementioned magnet crane, as well as the ability to use its radar. It cannot be obtained. 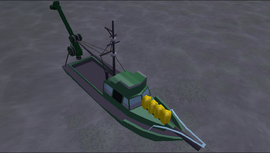