No
“An American muscle car in a class by itself. Roll down the windows and scream in testosterone-filled rage as you gun the engine while stuck in traffic. DNA wipes easily off the leather seats. Now available with exclusive Redwood Livery.”
— Southern San Andreas Super Autos description.

The vehicle is exclusive in Grand Theft Auto V for players returning from Xbox 360/PS3. It appears during the Stock Car Races and will become available in each protagonist's garage once the player wins the 2nd stock car race.

The Redwood Gauntlet is essentially a Gauntlet with a Redwood Cigarettes racing livery, sharing the same derivatives. The stock car may be modified further in Los Santos Customs including the ability to respray the underlying color. The sponsorship decals can not be changed or removed.

Color distribution is changed, where the primary one is applied on the bodywork. It shares the same wheel design, albeit able to support a dedicated color (set to red on purchased examples, but will reset to the default alloy color if the wheels are changed).

The Redwood Gauntlet has the following minor sponsors:

The Redwood Gauntlet receives massive improvements in performance when compared to the standard Gauntlet. It has increased acceleration due to the engine upgrade, and traction has been improved in order to counteract the weight and force of the acceleration. The top speed is much higher, where it statistically vies with high-end sports cars such as the Carbonizzare and Rapid GT. Its brakes are slightly improved, but is not enough to support the increased engine power. The car's handling bears no significant changes. As with the other stock cars featured with the Redwood Gauntlet, its mass was also reduced compared to its base model.

The engine model remains the same, where is shares the model of a typical V8 with a large cylindrical air filter mounted on the engine block. It also retains the 5-speed gearbox and the RWD layout. The engine sound has been changed from the one from cars like the Sabre Turbo, the Picador and the Buffalo S, to the higher-revving one from cars like the Massacro, the 9F and the Adder, and even still, it revs faster at engine redline than the aforementioned cars.

*The Redwood Gauntlet is limited to only the Classic, Matte, and Metallic color options. All color choices keep the liveries on the car intact. 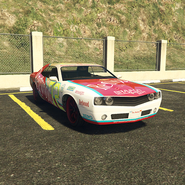 A Gauntlet (foreground) in stock car livery, next to a stock car Stallion.

The Bravado Gauntlet, with Redwood Cigarettes livery, as seen during Stock Car Racing.

The Redwood Gauntlet on the updated Rockstar Games Social Club.

The Redwood Gauntlet in the cinematic preview on Rockstar Games Social Club.

A vintage sign of Redwood Cigarettes with a Redwood Gauntlet, which can be seen inside the Auto Shop if the "Route 68" style is applied.

A Redwood Gauntlet featured on the Black Bravado Gauntlet Tee.

A Redwood Gauntlet featured on the Blue Bravado Gauntlet Tee.