View source
watch 06:00
Wiki Targeted (Games)
Do you like this video?
Play Sound

"Be a real man. Smoke Redwood"

Redwood Cigarettes are a tobacco company featured in the 3D Universe and HD Universe. The player can buy stocks from them on the Lcn-exchange.com website in Grand Theft Auto V.

In Grand Theft Auto: San Andreas, it appears on numerous billboards and advertisements on the radio stations. In the ads, it mentions that it "helps cure stress". Ironically, the company is the official sponsor of the Los Santos City Marathon.

In Grand Theft Auto: Liberty City Stories, the brand is mentioned as part of an Ammu-Nation radio advertisement (alongside with Logger Beer).

In Grand Theft Auto IV and its episodes, there is a website for Redwood Cigarettes which can be accessed using any computer. On the website, a cowboy is featured on the top banner, a reference to the Marlboro Man. It sponsors the #86 Bati Custom motorcycle in The Lost and Damned and The Ballad of Gay Tony. There is also a billboard poster for Redwood Cigarettes in Cerveza Heights, as of Grand Theft Auto: Chinatown Wars. Several Redwood crates are located inside the Chase Point Warehouse.

Redwood Cigarettes is shown to have existed as far back as 1947, where they advertised smoking for children, as well as having used product placement in an episode of Gordon Moorehead Rides Again. Their vintage mascot appears to have been a stereotypical red-faced Indian (a nod to the use of Native Americans in vintage cigarette advertising). By 2013, they seem to be involved in corrupt political practices, hiring four corrupt jurors to defend the company at a hearing.

In GTA IV, Redwood Cigarettes appear to utilise the Yankee as a delivery vehicle, as it can come with a Redwood livery.

Like its real-life counterparts, Redwood is also involved in sponsoring racing activities, having its name in the Redwood Lights Track, a place popular for off-road races. In GTA V and GTA Online, the Redwood Cigarettes livery is available on numerous vehicles, including the ready-made Redwood Gauntlet, and as a customisable feature on the Bati 801RR, Elegy Retro Custom, Itali GTB Custom and Sultan RS, and is prominently labeled on the Retro Rally Omnis livery for the Omnis. Its racing liveries are mostly based around the company colors of red, white and yellow and typically feature a red diagonal stripe down the sides of the vehicle.

In 1984, during the events of Grand Theft Auto: Vice City Stories, the company introduced Redwood Juniors, a brand of candy cigarettes intended to market the real product towards children. Each pack contains 20 candy cigarettes. There are many Redwood Juniors billboards and benches throughout Vice City, featuring the slogan "Junior's Gotta Start Sometime!". There is also a large replica of a Redwood Juniors box atop the Verdi Groceries store in Little Havana.

In the HD Universe, Redwood Juniors are still advertised in the company's website.

Redwood Gold is a gold filtered cigarette variant of Redwood, advertised as an alternative to vaping. Its tagline is: "Vaping Is For Losers - Real Men Go For Gold" which can be seen advertised in Grand Theft Auto Online during Arena War matches. This variant also features a new different logo typeface of Redwood with a native American chief figure as part of the branding, these appear to be the same from a vintage Redwood billboard in Sandy Shores.

Redwood is likely based on Marlboro and Winston. The logo bears a close resemblance to Winston in typeface, colour scheme, and design. Several of the motorsport liveries for many racing vehicles are based on real life Marlboro- and Winston-sponsored vehicles.

During the storyline, Redwood faces a big lawsuit against their cigarettes. They have paid off four jurors to testify in their favor during the trial. Lester then sends Franklin to kill the 4 corrupt jurors in the mission The Multi Target Assassination. With all 4 of the jurors dead, Redwood loses the lawsuit, making their stocks suffer a huge drop in value.

In By the Book to kill Javan you need to have Ferdinand Kerimov identify him. Javan smokes Redwoods, has a beard, and is average height and size.

After completing the mission The Multi Target Assassination, invest all the money of the protagonists in Redwood stocks, wait 2-3 days until their price returns to the pre-mission value, and sell all their stocks for a 300% return.

When playing Grand Theft Auto Online, the player may smoke Redwoods at any given time in the game. All the player needs to do is to buy a pack of them in any store. One package of ten cigarettes costs six dollars, and smoking will damage the player's health. However, the damage is so small, it's completely negligible.

Redwood Cigarettes appears as Tobacco supplies that can be stolen in Special Cargo and Air Freight Cargo missions in Grand Theft Auto Online.

Redwood Cigarettes has a website at redwoodcigarettes.com, present in Grand Theft Auto IV.

As expected, the site encourages the consumption of the product, emphazising in manliness, masculinity and a macho pose while minimizing or ridiculizing the health risks.

It has a small section dedicated to Redwood Juniors, promotional items like beach towels and a link to Tobaccofacts.net.

Redwood Cigarettes as part of the FlyUS in-flight meal in GTA V. 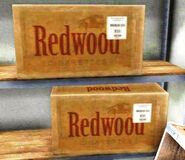 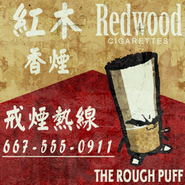 Poppy Mitchell in a Redwood Cigarettes advertisement in GTA V. 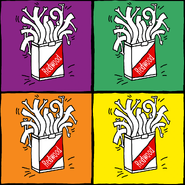 A Redwood Cigarettes pop-art at The Diamond Casino & Resort.