The Rednecks are a gang in Grand Theft Auto 2 that are opposed to the Scientists due to their low literacy skills. Billy Bob Bean offers missions to Claude Speed that involve high levels of destruction, and doing missions for them can lower the player's faction with the Scientists.

The gang use a variant of the Pickup as their vehicle and have control of the Mobile RV Park, Redemption and Guntersville areas of the Residential District of Anywhere City. The gang operates a car crusher in the Mobile RV Park, which unlike the others found in the game, does not give the player a reward.

The gang's logo appears to be a version of the "Dixie" flag.

Billy Bob Bean, the leader of the Rednecks. 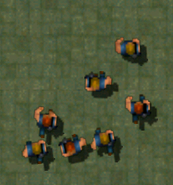 Members of the Rednecks.
Add a photo to this gallery

Retrieved from "https://gta.fandom.com/wiki/Rednecks?oldid=1241942"
Community content is available under CC-BY-SA unless otherwise noted.