Standard White - 100%
“Here you are again, stuck in the commute, bricked in with all the other SUVs. How much time have you spent here? Weeks? Months? Years? Screw it. Stamp the gas, ram the traffic and take to the hills. You're free. Free from the system. Of course, you're too cowardly for that. But one day you'll snap and you'll be glad you have the reliable Rebla GTS to speed you away from reality.”
— Legendary Motorsport description.

The Übermacht Rebla GTS is a luxury SUV featured in Grand Theft Auto Online as part of the The Diamond Casino Heist update.

The Rebla GTS is strongly based on the fourth generation BMW X5 (G05), seen in the overall look, front and rear ends. When modified correctly, it may resemble the X5 M, a high-performance derivative.

The vehicle is a newer, sportier iteration of the Rebla from Grand Theft Auto IV, which inherits the general SUV design, but enlarged and modernised. The front end is mostly dominated by the rectangle-shaped grille and the set of hexagonal lamps and LED stripes on the upper side, together with the intakes, high-beam LED stripes, and plastic separations on the lower side. The manufacturer badge can be seen on the front of the bonnet.

The sides of the car are distinguished by the small extensions on the wheel arches, as well as the flat skirts. A ridged detail can be seen starting from the small vents on the front fenders and running towards the rear door handles. The greenhouse area is predominated by the plastic trim around the windows, half-coloured rear-view mirrors, and a distinctive panoramic roof, allowing a view of the sky in first person, best seen from the rear seats. Two plastic strips run towards the rear of the roof and extend a bit above, forming two roof racks, along with a single vortex generator. The "GTS" badges can be seen below the vents.

The rear of the car features large tail lamps on either side and the manufacturer badge on the centre, along with the "REBLA" and "GTS" badges below the lamps. A half-coloured rear bumper can be seen at the bottom, housing the red LED stripes and the rectangle slots housing the dual circular exhausts.

The interior of the car reuses the same details as the Toros and the Novak, with the exception of the corresponding manufacturer emblem on it. The dials are the same FMJ-based dials also used on the aforementioned vehicles.

The car is prominently painted in a primary colour, while the upper surfaces of the lower sections and the details of the engine are painted in a secondary colour. A trim colour is also available for the interior stitching. 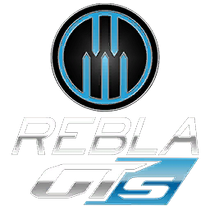 The Rebla GTS appears to be powered by a lively V8, giving it decent acceleration. Traction is relatively decent for an SUV. While understeer is an issue at high speeds, it is still quite competitive against other SUVs in races and is also quite efficient at off-road. Crash deformation is excellent. 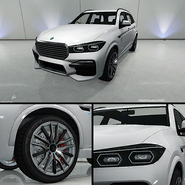 The Rebla GTS on Legendary Motorsport.

The Rebla GTS in the cinematic preview on Rockstar Games Social Club. 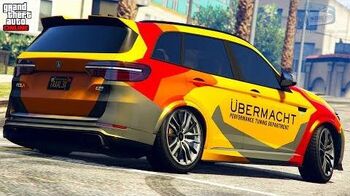