The building is located off Route 68 in the Grand Senora Desert on a hill to the left of the Redwood Lights Track and to the south of Harmony.

Surrounding the buildings are three utility poles and a thirteen-space parking lot. A low-cut hedge runs around the entrance and left side of the main building, with a gap left for easy access to the front door. An American flag hangs by a pole from one part of the building with vertical signage reading: Rebel. A large horned steer skull is mounted above the front door and the Rebel Radio steer logo is on the front door. CCTV cameras are mounted around the buildings. A second solid brick windowless building overlooks Route 68 with large REBEL signage mounted on the roof. A broadcast tower is next to this second building.

The radio station's playlist can be heard playing around the main building, although no external speakers are visible. This stream is not synchronised with what is currently being played on the station and excludes any DJ continuity, news bulletins or advertising.

At night, the player may hear Morse code transmissions from the broadcast tower. One of these is a simple ...---... SOS message. The other is a lengthy message from the Altruist Cult:

“Ban clothes. Ban lies. Ban deceit. Eat of the flesh. Drink of the blood. We shall be free once more because we know altruism. The greatest good, for the greatest generation. We shall boom again.”
— Translated morse code message. 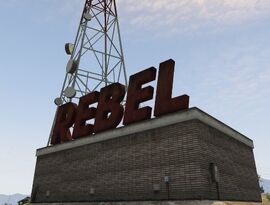 The adjacent building, with tower in background. 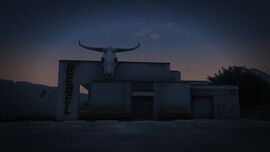