“Because bigger ain't always better, get your hands on this compact Japanese all-terrain pickup truck. First time the non-rusted version has been available to purchase with us, so look forward to damaging it yourself.”
— Southern San Andreas Super Autos description.

The truck features a very linear design similar to that of the fourth generation Toyota Hilux Xtra Cab, although the grille takes more influence from the third generation models. The rear quarter of the vehicle in particular resembles that of the second generation Mitsubishi Triton.

The Rebel is a compact 2-door pickup truck which inherits the general design and role previously filled by the Bobcat in the 3D Universe (the HD Universe Bobcat is redesigned into a full-size pickup). On the front end, the truck features a flat chrome bumper spanning the entire width of the lower area and mounts a plate holder on the centre, while an open section can be seen below. The upper area has a black rectangular grille with four horizontal elements behind the five inner vertical ones, housing square fog lamps on the outer squared sections and the manufacturer badge beside the driver-side lamp. Next to the grille are black sections that are slightly larger than the grille itself, each one housing a circular headlamp within the squared section and vertical amber signals on the outermost borders. The bonnet is relatively flat and has two body lines aligned with the innermost borders of the headlamp housings. The Rebel and all its variants use Sabre Turbo light textures.

On the sides, the vehicle features plain fender panelling with slightly flared front arches and black square mirrors near the front end, while large silver/chrome steps can be seen spanning the wheelbase of the truck. The spartan cabin has room for two occupants, bearing black trim around the windows and vertical rear-quarter windows, whose bottom edge is in line with the bottom edge of the door handle. Dual exhaust tubes can be seen on the driver side, below the side step and below the truck bed.

The rear is predominated by a medium-sized load bed area with the same flared arches as the front fenders, an impressed area near the top which leaves a ledge at the top of the body for the load bed area, and "REBEL 4x4" markings seen on the rear quarters. The rear end of the truck features a tailgate with an impressed area and large embossed lettering of the manufacturer KARIN (in a similar manner to the embossed TOYOTA lettering on the rear of the real-life Hilux), as well as silver badges on the lower corners of the tailgate. The outer edges house rectangular rear lamp units, and has no rear bumper or license plate.

The underside of the truck denotes its aftermarket "lift kit", having blue shocks and red springs similar to the Sandkings (both the SWB and XL variants), as well as parallel trailling arms appearing to run from the centre, towards each end of the axles.

The interior shares a similar interior to that of the Bobcat XL, sharing the same dial set in the enhanced version. It is also fitted with a CB radio, and occasional trucker chatter can be heard regardless of whether the main radio is turned on or off. The chatter will only play if playing as Trevor and in Blaine County.

The Rebel may spawn with certain accessories:

The general bodywork is painted with the primary colour, while the "REBEL 4x4" markings are painted with the secondary one. The truck appears with eight spoke wheels wrapped in high-profile off-road tyres.

On road, the Rebel has ample acceleration and a reasonable top speed in line with other trucks. It stays flat in the corners for a truck with its size and height, and is somewhat sporty. Its ride, however, is stiff and punishing.

Off road, the Rebel is easily one of the best off-road vehicles in the game. Its high ground clearance, 4-wheel drive and large off-road tyres allow the Rebel to negotiate hills and rocks with ease, and it has little chance of a rollover. Its engine provides ample power, and will easily cause wheel spin when going up steep and slippery hills, but if the driver feathers the throttle, the Rebel will make use of all of its grip well and climb hills easily. The Rebel can reach relatively high speeds on off-road environments, and landing right from jumps has the suspension taking in all the impact, leaving the body undamaged. The truck has a short wheelbase, although "beaching" the truck is still a danger the driver must watch, especially when rock climbing with the truck.

The Rebel is powered by a V8 engine as indicated by the cover and badge, coupled to a 5-speed gearbox in a front engine, all wheel drive layout (30% front, 70% rear). The truck uses a high-revving and roary diesel sound, similar to the Rancher XL, the Landstalker and the Cavalcade.

A front view of the beta Rebel before it is destroyed by Trevor as seen in his trailer.

A rear and side view of Rebel burning after Trevor sets it on fire.

A screenshot with the truck destroyed by Trevor.

A Rebel and its confirmed name in the Gameplay Trailer. 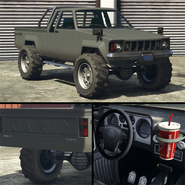 The Rebel on the updated Rockstar Games Social Club.

In comparison to its rusty variant, the Rebel is quite rare to find, though it may be common for a while when it spawns: