Standard White - 100%
“Statistically, use of the accelerator in a Pegassi Reaper is more likely to cause a fatal brain hemorrhage than any other activity known to medical science. Fighter pilots have to undergo years of training before experiencing this kind of G-force, but luckily for you the only qualifications required to get behind the wheel are an above-average credit rating and a hearty contempt for the poor. Diamond-finish cup holders and a live-in butler come as standard.”
— Legendary Motorsport description.

The Pegassi Reaper is a two-door hypercar featured in Grand Theft Auto Online as part of the Further Adventures in Finance and Felony update.

The vehicle is clearly inspired by the Lykan HyperSport, seen in the body, silhouette and the A-pillars, while the frontal and rear fascias, as well as most of its features, appear to primarily take influence from the Lamborghini Huracán. The stock wheel rim design is based on that of the Lamborghini Aventador SV.

The car has a short wheelbase and a relatively wide track, where the front makes use of a trapezium-shaped intake on the centre and two larger side intakes, the latter having sharp edges below. On the bonnet area, the car features narrow headlamp housings, each one having large circular lamps on the outer sides and smaller LED strips on the inner sides. The bonnet itself appears to feature a slightly inset section on the centre and is slightly curved around the front area, while the manufacturer emblem can be seen just in front of the bonnet.

On the sides, the car makes use of rounded fender arches, with a flat profile around the wheels. The skirting area are prominently finished in plastic, and slightly angle upwards as they approach to the rear wheels. The doors are noticeably inset in comparison to the fenders, leaving the corresponding front exit and rear intake ducts. The greenhouse area is relatively basic, featuring small rear-view mirrors and plastic details on the upper area. The area behind the cabin features large plastic louvers above the engine bay.

The rear overhang is very compact compared to that of the front and the rear of other sports car/supercars, with the upper area extending past the whole rear end. There is a set of modern red/white lamps on the outer edges, together with a single red strip on the centre and the manufacturer emblem just below it. The lower section is mostly predominated by the rear open section and the square-shaped exhausts. Its underside is fully plated in plastic/carbon-fibre, with an elevated centre on the front overhang and the integrated diffuser on the rear end, extending past the general bodywork and holding the central license plate.

The interior of the car is shared with the Vacca and the Zentorno, with the dials being the same ones from the Vacca (which are a yellow variation of the original blue dials from the Banshee). However, it uses a lightweight steering wheel, bearing no manufacturer emblem like the aforementioned sports cars.

The car's bodywork is prominently painted in a primary colour, while the interior stitches and the inner spark plug cover are painted in a secondary colour. The vehicle uses unique rims consisting of various wire split spokes, appearing to form various diamond and triangle shapes around these. The centre of the rims also bear smaller manufacturer emblems.

The Reaper is a good performing car. The car has average top speed compared to most high-end supercars, but good acceleration thanks to its high powered engine. The rear wheel drive layout and the light body weight, however, makes it prone to spinning out in corners.

The engine model appears to be the same as that of the Cheetah, Turismo R, Osiris, T20, and FMJ, being a single-cam V8 engine. The engine sound is typically high-revving, similar to the ones from the Cheetah and the Turismo R.

The Reaper in an official screenshot.

A blue Reaper as seen in the Further Adventures in Finance and Felony trailer. 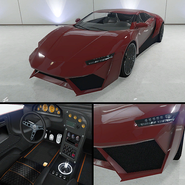 The Reaper on Legendary Motorsport.

The Reaper on the Rockstar Games Social Club.

The Reaper on the updated Rockstar Games Social Club.

The Reaper in a Cinematic preview on Rockstar Games Social Club.