Real Badman is a paranoid Jamaican criminal and drug dealer, the leader of the posse of Yardies, and the boss of Little Jacob, as well as his closest friend.

Teafore Maxwell-Davies was born in Jamaica, circa 1981. At some point in his life, he met Jacob Hughes, and the two became very close friends, and eventually formed their own faction among "Yardies", going under the names "Real Badman" and "Little Jacob", respectively.

At some point prior to 2001, Badman, Jacob and many of their friends moved to Liberty City. In 2001, both Badman and Jacob were arrested for an armed robbery. In 2002, Badman was arrested for the sale of a controlled substance (cocaine), and in 2006, he was arrested for assault.

Over his time in Liberty City, Badman became an extremely paranoid person. Jacob mainly blamed the drugs Badman had used as the cause of his paranoia, and became very concerned that Badman would betray him in the future. According to Jacob, he and Badman once had a friend called "Granddad", who was the only one who was able to calm down Badman, but he has since then returned to Jamaica.

Badman is also familiar with the well known drug baron Elizabeta Torres, and according to Jacob he is actually afraid of her. Badman is also an associate of the Spanish Lords, and a bitter enemy of two small-time gangs of Jamaican and African-American drug dealers. He seems to have problems with some Russian gangsters too.

Rivalries with other dealers

Having problems with one of Jamaican drug dealing crews, Badman and Jacob decide to make a truce with them, with a meeting between Jacob and their representative is set at Dillon Street in Schottler. Jacob goes to the deal, finding out it is a trap to "teach Badman a lesson". Jacob is saved thanks to Niko Bellic, the man who took Jacob to the meeting (and the cousin of Jacob's friend Roman).

Being in need for a new supplier of merchandise, Badman later sends Jacob to a drug deal with the another dealers. Jacob once again is supported by Niko, and the two arrive to the dealers' apartment. The dealers attempt to escape, but are killed by Niko. Jacob then decides to take down the dealers, and along with Niko, he drives to the dealers' second apartment, ending the small faction.

Niko finally meets Badman during his third mission with Jacob. As he enters Jacob's apartment, Niko is pinned down by Badman, who thinks him to be a thief or an assassin. After being told by Jacob that Niko is a friend, Badman releases Niko, and the two have a proper introduction. Niko is taken to Jacob, and both Jacob and Badman explain their situation; an African-American dealer and his associates have been selling drugs on Badman's turf, and they have not gave a share of their revenues to his gang. Niko drives to Bohan, where he finds the dealer, who just finished another successful deal. Niko tails him to a building, where he kills him and his associates inside the dealer's apartment.

After successfully completing the task, Niko is phoned by Jacob if he wants to help him and Badman with their drug deliveries, to which Niko agrees. In a series of ten drug deliveries, Niko takes a vehicle loaded with drugs and brings it to the buyer. In some cases, Niko is ambushed by either the police or rival gangs, but manages to complete Badman's tasks.

After Niko has successfully done nine drug deliveries, Badman decides to reward him. At the beginning of the tenth delivery, instead of a bitter old car, Niko is given a Jamaican Huntley Sport as a gratefulness from the Yardies. Following the completion of the tenth delivery, Badman and Jacob stop giving missions to Niko, due to heavy police investigation.

Random encounter: Problems with the Russians

“Yo rudeboy, lemme tell ya somethin'... y'see, fish could keep dem mouth closed... dem wouldn't get caught, rudeboy.”
— Badman, regarding his situation with the Russian Mafia.

After his troubles with his rival drugs dealer are done, a new problem starts in Badman's life; Russian mobsters have begin to invade Badman's turf, stealing his gang's money, and making him to pay debts. Seeing these acts as disrespectful, Badman wants to take them out.

Sitting on a bench in East Island City, Badman is encountered by Niko, who, at first, fails to recognize him. Badman tells Niko his newest situation. Niko, whose life is also filled with Russian mobsters, decides to help Badman with his troubles.

The duo heads to the mobsters' location, in an ally in which they were making a deal, leading to a small shootout begins between the two factions, and resulting in the deaths of the Russian mobsters. Badman thanks Niko for helping him, saying that he proved himself, and rewards him with $500 for his troubles.

Near the end of the game, Roman, Niko's cousin and Jacob's friend, marries to his love interest Mallorie Bardas, in a small ceremony in Algonquin, with Badman being one of the guests (along with other supporting characters such as Brucie Kibbutz and Bernie Crane). In both endings, Badman is seen most of the time with Jacob, cheering Roman and Mallorie.

In both endings, Badman does not play a large part in the wedding, only quietly watching how the events of the wedding turned bad where Niko's enemies destroy the party, sadly looking at the corpses of either Roman or Kate McReary.

Not much is known about how Badman continued on with his life after Roman's wedding since he is not seen again.

“The herb make Badman's head work in all type of ways it shouldn't be working. He think his friends are after him. He ain't turned on me yet, but one day. You know, one day.”
— Jacob telling Niko about Badman's growing paranoia.

A long line of rivalries with other drug dealers and his excessive smoking of marijuana made Badman a very paranoid person; he began to suspect his friends, lock himself in his and Jacob's apartment, and according to Jacob, carry weapons when he comes out of their apartment. Badman gradually began to believe that someone is after him and wants to destroy his business. This thought also led him to believe that his friends or associates may also come after him. Jacob himself became worried upon Badman's paranoia, thinking that because of Badman's belief that Jacob or another friend will kill, Badman will turn on them.

His paranoia also affected Badman's regular traits, leading Badman to become careful during different situations and subduing people he thinks to be robbers or murderers (as seen in "Shadow"). Jacob also states that Badman does not leave his apartment unless he is "packing more heat than the sun", as seen during Badman's random encounter, in which he is sitting on a bench with a Pump Shotgun.

Similar to other "Yardies", Badman is Rastafarian who speaks in Iyaric. Like Jacob, Badman speaks with many terms from his culture such as "Rasta", "rudeboy" and "Star".

Badman is a man of average size, around the same height of Niko Bellic and Jacob. Due to his birthplace, Badman has dark skin, short black hair and brown eyes. His main outfit consists a colorful checkered vest on a white long-sleeved shirt, as well as olive pants and black/green shoes. He is also known for wearing a black hat, which appears to be either a Gatsby cap, or a flat cap. 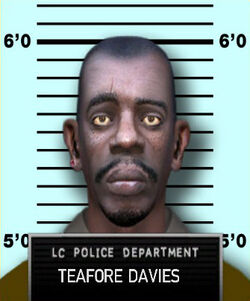 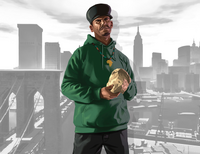 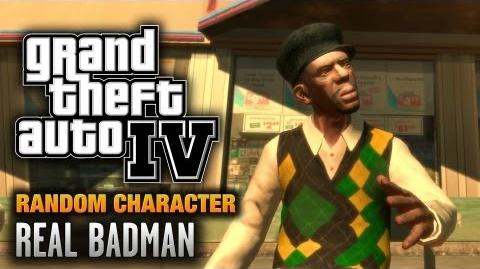