Robert Loggia (GTA III)
Peter Appel (GTA LCS)
“You must be Asuka's new errand boy! You got the money? Is it all here? I know what you're thinking, another bent cop. Well, it's a bent world.”
— Ray Machowski meeting Claude in the mission Payday For Ray.
“Hey watch your mouth, Leon. I can't believe we're having this fucking conversation.”
— Ray Machowski to Leon McAffrey in the mission Crazy '69'.

In GTA III he is voiced by the late Robert Loggia, who has also appeared in Scarface, and in GTA Liberty City Stories by Peter Appel, who also voiced The Tight End Zone host Derrick Thackery in Grand Theft Auto: San Andreas.

Although very little is known about his early life, it is known that he served in the military, presumably alongside Phil Cassidy.

After serving in the military, he joined the Liberty City Police Department and was teamed with corrupt officer Leon McAffrey, who introduced Machowski to Toni Cipriani. Machowski was reluctant to work with criminal elements at first, but at some point prior to 2001, he changed his attitude and began working as an informant for Asuka and Kenji Kasen, the co-leaders of the Yakuza.

Feeling convinced about Claude's potential, Asuka later refers him to Machowski. To better know who he's dealing with, Machowski has Claude drive to a series of phone booths around Staunton Island.

Convinced that Claude is reliable, Machowski later employs him to do several jobs such as the following: kill his former partner Leon McAffrey, help Phil Cassidy defend his business, collect and destroy some evidence, and kill Ray's current partner.

During this time Machowski is being investigated by both internal affairs due to his links to the Yakuza and the CIA due to his attempts to stop the Colombian Cartel and their production of the drug SPANK. Fearing arrest, he later hires Claude to drive him to the Francis International Airport so that he can evade capture. As soon as they reach the airport, Ray gives Claude the keys to a lockup in Newport, and manages to successfully flee to Miami.

After this, Ray is never seen or heard of again.

Ray in the original version of GTA III.

Ray during the mission Marked Man.

In game model of Ray. 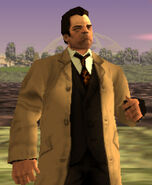