"There is a price for everything in this city. You just have to find out what it is."
― Ray Bulgarin

Ray Bulgarin is an extremely wealthy, powerful Russian crime lord operating across the Adriatic Sea (either Italy, Slovenia, Croatia, Bosnia and Herzegovina, Montenegro or Albania) and Liberty City until he was deported.

Bulgarin was born in 1958 and had a sister named Galina. As a child, he was in a wrestling academy, where his coach apparently made him take steroids.

Bulgarin later emigrated to Liberty City and began his criminal life. In 1989, at age 31, he was arrested for receiving an entire ship full of Albanian sex slaves. Sometime after, he continued human trafficking across the Adriatic sea, where he also lived in a large mansion on the waterfront.

He employed Niko Bellic as a people trafficker, with Niko smuggling people into Italy from Eastern Europe, until one run in which the ship sank, and Niko was forced to abandon it and its cargo and swim to safety. Bulgarin blamed Niko for this loss, and sought to hunt him down. Niko joined the merchant navy to escape Bulgarin's influence within Europe, and spent seven months on the Platypus before escaping to Liberty City.

In 2008 or sometime before, Bulgarin returned to Liberty City to expand his business interests, and met up with his old friend Dimitri Rascalov. Dimitri offered Niko, who was working for him by chance, to Bulgarin without hesitation; Niko escaped the ambush and Bulgarin still insisted on tracking him down, with Dimitri's help.

Much more about Bulgarin is revealed in The Ballad of Gay Tony. He is interested in buying the Liberty City Rampage hockey team from Marki Ashvilli, as well as the Maisonette 9 nightclub from Anthony "Gay Tony" Prince. More about his personal lifestyle is also shown - he owns an Oracle, a blue Landstalker (which he sacrifices to kill a crooked NOOSE team on his case) and a black Marbelle. In his spare time he enjoys playing rock music with his bodyguard Timur. He also has very impressive collections of arcade machines, sports and rock memorabilia (some of it used by famous rock stars, including a $50,000 guitar) and even fine art (he talks on the phone about wanting to pay $20 million for a painting). Bulgarin believes "everything has a price, you just have to find out what it is", going so far as to try to hire a woman at Maisonette 9 as a prostitute for the night. Bulgarin hired Luis Lopez to assist him with the hockey team acquisition by first eliminating some crooked NOOSE members. Eventually, Bulgarin and Ashvilli have an argument, and Luis must kill the team owner in a hectic ambush.

Eventually, Bulgarin discovers that Tony and Luis had obtained the diamonds that were stolen from him by a cook, (after Luis and Tony originally failed to buy them from him), which made him turn against Luis. In the mission during which he betrays Luis (In The Crosshairs), he (after potentially killing his sister) clearly had an upset tone with Luis; he then sent him to a Little Italy roof top to "help Timur". When he got there, he lead Luis to a box on that rooftop that had The Cook's severed head on it. Suddenly, a massive ambush of snipers, shooters, rooftop gunmen, cars of gunman and even a helicopter presents itself to Luis; but, roughly, he escapes.

Later, Giovanni Ancelotti's daughter is kidnapped. After Luis Lopez locates her, Giovanni, Gracie's father, coerces Luis and Tony to exchange the Diamonds for her life. Bulgarin finds Niko and Luis representing opposing parties and orders his men to fire. Bulgarin failed again, as Niko and Luis both escaped and his diamonds were lost for good when one of his men threw the diamonds into a truck when confronted by Niko and Patrick McReary.

Giovanni Ancelotti later sends Vince and Rocco Pelosi to tell Luis that he must either kill Gay Tony and become partners with Vince and Rocco, or else he and Tony will be heavily ambushed. After killing Vince, Luis fends off the pursuing hitmen. At this time, Bulgarin — after Dimitri Rascalov is killed by Niko Bellic — claims the Heroin from him.

During the mission Departure Time, Luis destroys the heroin shipment and kills Bulgarin's gunmen, including Timur, which is being stored at Funland. Later, after receiving help from Yusuf Amir, Luis is able to jump aboard Bulgarin's plane, which he is using to flee the country. Bulgarin demands Luis not kill him (as he is holding a grenade that will explode). Luis kills Bulgarin, which activates the grenade. The plane explodes in mid-air, but Luis survives and parachutes back to Liberty City.

Artwork of Ray Bulgarin in The Ballad of Gay Tony. 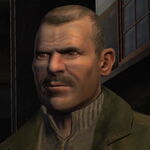 Ray Bulgarin as depicted in GTA IV. He dons a significantly different outfit in this game.

Bulgarin and Dimitri Rascalov meet Niko Bellic during the ambush in Russian Revolution.

Bulgarin firing an AK-47 at the ceiling of his home's ground floor in an attempt to shut his sister up during In the Crosshairs.

Ray's blue Ghawar.
Add a photo to this gallery

Retrieved from "https://gta.fandom.com/wiki/Ray_Bulgarin?oldid=1008502"
Community content is available under CC-BY-SA unless otherwise noted.