GTA Wiki
Register
Don't have an account?
Sign In
Advertisement
in: LCPDDB, Pages with unsourced statements, Characters,
and 8 more
English

Ray: "I got the feds all over me, I got a boss who's a paranoid wreck, and I got a guy above me in the foodchain with a brain like an overcooked artichoke. Things are great."
Johnny: "Yeah? Sounds like shit to me but whatever."
―Ray Boccino complaining to Johnny Klebitz in the mission Bad Standing.

Ray Boccino was born in 1976 in Westdyke, Alderney. He is of Italian ancestry.

His criminal record stretches back to 1990, when he was arrested at the age of 14 for possession of stolen property.

Little else is known about Boccino's background, although at an unknown point in time he became a caporegime in the Pegorino crime family. He has developed a rivalry with Phil Bell, and even accuses him of working with the Federal Government.

Jimmy Pegorino has a negative opinion on Ray due to his inability to bring his operations to fruition (including the issue with the Diamonds) and states in Pegorino's Pride that he doubts that Ray will ever make it to the level he wants to reach due to his greed (it is possible that Ray wants to officially become Pegorino's right-hand-man, or one day become the boss of the organization). Ray is often mentioned in conversations between Phil Bell and Pegorino, and Niko even blames Ray for the Diamond issue because of his poor planning and the amount of people he would get involved. Ray's greed, selfishness, and corruption would eventually lead to his death.

Boccino is based at Drusilla's restaurant in Little Italy, Algonquin.

Boccino is first introduced chronologically while speaking to Billy Grey in The Lost MC Clubhouse after selling firearms to the biker gang. He becomes acquainted with Johnny Klebitz before leaving.

Pegorino regularly orders Ray to host operations in Algonquin. Ray often comes up with schemes to steal businesses from the Ancelotti crime family and the Liberty City Triads in order to spread more Pegorino Family influence through Liberty City. He hires the McRearys and Niko Bellic to do several jobs for the Pegorinos, such as stealing cloned medication from the triads, stealing an Ancelotti pay-off, crippiling the Ancelotti's alliance with the Albanian mob, and killing Ancelotti capo Frankie Garone.

Later on, during the Lost MC's civil war, Brian Jeremy contacted Ray regarding Johnny Klebitz. Brian conspires against Johnny, and wants Ray to help him annihilate Johnny's faction of the motorcycle club. Ray favors Johnny however, considering him as a much better businessman than Brian (due to the latter's irrational devotion to the imprisoned Billy Grey). Ray reveals Brian's whereabouts to Johnny so that business between him and The Lost can resume as usual.

Afterwards, Ray hires Niko to kill Teddy Benavidez, as Benavidez owes Ray money which he has not repaid.

Ray eventually becomes aware that very valuable diamonds are going to be sold to nightclub empresario Tony Prince in East Hook. Ray believes he could make a lot of money from selling the diamonds, and plots to steal them. Through his contact with Ashley Butler (with whom he was presumably having an affair), Ray hires Johnny and The Lost to steal the diamonds.

Johnny successfully steals the diamonds, and Ray orders him to stash the them in two separate sets of trash bags in located in different areas to one-another in Algonquin. Immediately after the diamonds are stashed, Ray orders Niko to assist members of his crew (Joseph DiLeo, Johnny Barbosa, and Luca Silvestri) to collect them. It is later discovered that DiLeo, Barbosa and Silvestri planned to take the diamonds for themselves and flee to Las Venturas; Ray sends Niko to retrieve them. Niko kills Luca and his crew before meeting Ray in Middle Park, where he gives him the diamonds.

Later, Ray sends Niko and Johnny to the Libertonian to sell the diamonds to Jewish Mob associates Issac Roth and Mori Green, however they are attacked by Tony Prince's bodyguard Luis Lopez, whom steals the diamonds.

In the confusion of the ambush, Johnny takes all of the money in a panic, and Niko is left with nothing. Niko contacts Ray to inform him of the ambush, and that Johnny has stolen the money but isn't sure where the diamonds are. Johnny had given the money to fellow Lost MC member Jim Fitzgerald for safe keeping. Ray immediately questions Johnny about the money, and Johnny denies that he took it.

A short time later, Ray believes that Johnny took the money; he has Fitzgerald kidnapped and tortured for information in the basement of Drusilla's. Ray uses Jim's cellphone to text Johnny and lure him to Drusilla's.

After a brief argument between Ray and Johnny, Jim executes Ray's henchman and escapes alongside Johnny.

Ray is quick to react - he hires Niko to find and eliminate Jim, and sends his own men to hunt for Johnny (Johnny survives the attack, and kills all of Ray's hitmen but Niko succeeds in killing Jim).

Ashley later tells Johnny that Ray has managed to kill Jim (unbeknownst to Johnny, Niko is the one who killed him). Johnny wants to get revenge, but is told not to by Congressman Thomas Stubbs because the whole Pegorino syndicate are under surveillance and that half of the organization would be "either dead or arrested within a month".

Later, Isaac Roth begins to blame the ambushed diamond deal on Boccino and threatens to have him killed. In retaliation, Boccino again orders Niko to murder Roth (as well as his two henchmen) at Roth's penthouse at the Majestic Hotel. Afterwards, Boccino arranges an apartment in Alderney City for Niko so he can can "keep a closer eye on him". Niko refuses to do anymore work for Boccino from this point on. Before or after this mission, Ray will give Niko Bellic what he promised him in Museum Piece; the location of Florian Cravic (though Niko ends up sparing him as he realizes that he is not the target).

Ray makes a brief cameo in the opening cut scenes of Phil Bell's & Jimmy Pegorino's first missions. He also tells Niko that he made the introduction (though Niko will once again say that he is not connected to Ray). He is often brought up in conversations with Pegorino and Phil - in fact, in Pegorino's first mission, Niko will comment that Ray's poor planning and the amount of people (Johnny, Luca's crew and Isaac) he trusted are to blame for his failure to get the diamonds. Ray can also be called after Payback, I'll Take Her & Diamonds are a Girl's Best Friend (provided that he hasn't been murdered yet). Interestingly, Ray will later call Niko telling him he knows that Gay Tony has the diamonds and asks him to steal them. Niko, wanting to avoid what would have been a very huge plot twist in both TBoGT and IV, refuses to do so.

Later in the game as the Pegorino family's affairs fall further into turmoil, Jimmy Pegorino decides to send a message to any possible informants in the organization and orders Niko to kill Boccino, believing that he has snitched on the family. After leaving a sit-down in East Holland, he and his bodyguards head to an auto shop in BOABO. Seeing the opportunity, Pegorino tells the convoy to stop for gas on the way so Niko can ambush them (however, it is ultimately up to the player how they wish to proceed with the hit). Regardless, Boccino and his men are killed on the way to the auto shop.

“Ray Boccino is a slimy motherfucker. The one thing you can rely on him for is greed.”
— Patrick McReary

Ray is an extremely greedy character, trying to find deals and jobs that are worth a lot of money for personal gain. He works with many thugs and mobsters, like the Irish Mob, in order to be favored by Jimmy Pegorino, trying to please him with every way he knows. He is, however, distrusted by most of his associates (and by Jimmy Pegorino himself) due to his greed. Despite this, he is above betraying his close associates to further himself. In fact, the opposite is true; although his associates speak of him warily, Ray finds himself betrayed by his own cohorts several times. Luca Silvestri and his crew kept the diamonds they stole for themselves, Johnny Klebitz steals his profit during the diamond fiasco and it is ironically his boss Jimmy Pegorino that orders his final fate on suspicion alone, with Niko Bellic being the one who takes him down.

Ray is also known to have an explosive temper, at some point in his past throwing a man stealing money from him and his waste management business in a trash compactor after nearly beating him to death.

NOTES
- Capo with the Alderney based Pegorino Crime Syndicate.


- Believed to be expanding operations into Algonquin.
- Involved in criminal activities outside the Syndicate.
- Believed to handle Jimmy Pegorino's relationship with smaller gangs such as Gerald McReary's crew in Dukes. 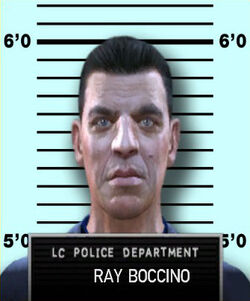 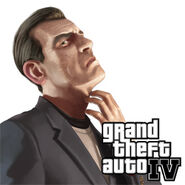 Ray Boccino in TLAD, who appears with a more casual outfit during the first half of the storyline.

Ray talking through a Whiz High Speed Phone with Phil at Drusilla's.

Ray with Pegorino and Bell.