Standard White - 100%
“Like any real biker you'd rather spend your hard-stolen cash on smokes, liquor and crates of wet wipes. Well look no further, this is the ride for you. We haven't done much more than scrape off the remains of the previous owner, fill it with enough glue and diesel to keep it together at 80mph, and sell it on. It's like recycling, but really bad for the environment.”
— Southern San Andreas Super Autos description.

The Western Rat Bike is a motorcycle featured in Grand Theft Auto Online as part of the Bikers update.

The Rat Bike's appearance is based on the Harley Davidson KKF 14, seen particularly in the front girder design and springer front end, the primary drive, front sprocket, brake rotor and caliper, as well as the large V-twin engine. It shares the same real life design influence with the Wolfsbane, the Harley Davidson 1200).

The bike is essentially a rusted/worn variant of the Wolfsbane, with rusty frames and main components, along with the removal of livery options. The vehicle also sports a dedicated "Rat Bike" dial texture, which is the same "Chopper" dial but with a broken glass (albeit still functional). Like most motorcycles featured in the same update, it has a protruding primary drive with an Atomic-branded belt and a chain drive, both fully-animated.

Color distribution is the same as the regular Wolfsbane, with the primary one being applied to the fuel/oil tanks and the rear fender, and the secondary one on the forks, handlebars, frame and swingarm. It also uses a rusty version of the Wolfsbane's wheels.

Despite its seemingly rusted-out appearance, the Rat Bike is identical to the Wolfsbane, with average speed but seemingly poor turning radius.

Like the standard Wolfsbane, the Rat Bike uses a chain-driven, V-twin internal combustion engine with a 5-speed manual transmission, as evidenced by the foot-actuated gear shifter. Its engine sound is the same as the Wolfsbane, being a variation of the one used on the Zombie Chopper and its Bobber variant, with an extra louder engine tone.

Statistic-wise, it is identical to the Wolfsbane, as both shares the same weight, top speed and acceleration.

A screenshot of the Rat Bike. 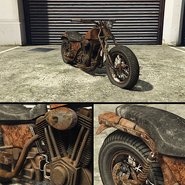 The Rat Bike on the updated Rockstar Games Social Club.

The Rat Bike in the cinematic preview on Rockstar Games Social Club.