GTA Wiki
Register
Don't have an account?
Sign In
Advertisement
in: Vehicles, Vehicles in GTA V, Vehicles manufactured by Bravado,
and 8 more
English

RLOADER
“Don't think of this as buying a rusty pick-up truck with shoddy brakes; think of it as buying a piece of history. The 1930s look is huge right now, so you'll have to act fast if you want to beat the hipsters to the punch. We know you'll treasure this classic Rat-loader from Bravado just as much as the previous 19 owners did.”

This vehicle appears to be based on the Duneloader, which resembles a 1946 Dodge Power Wagon.

It features a ramshackle flat bed covered with random trash, but can be given a standard bed at Los Santos Customs. The Rat-Loader features crooked and bent front and rear license plates, a crooked front grille with missing and bent bars, and a bent hood. The stock Rat-Loader has rusty "Smoothie" wheels wrapped in discolored offroad tires. The truck has no front or rear bumpers; the license plates are instead mounted on the bars the bumpers would normally connect to. It also features a rusted and faded paint job. The Rat-Loader has no tail light cluster, and as such does not feature reverse lights, turn signals or brake lights. The vehicle is also fitted with a CB radio, and occasional trucker chatter can be heard regardless of whether the main radio is turned on or off. The chatter will only play if playing as Trevor and in Blaine County.

Most of the above damage can be repaired at Los Santos Customs, or, if desired, complete removal of the body panels. However, no matter what, the faded and rusted paint job remains. The body modifications available for this vehicle can make it look more like a Rat rod.

Although the Rat-Loader comes with a modern V8 engine producing a fair amount of torque, the weight and thin tires make it prone to wheel-spin both off the line and on the way as well as giving it very poor braking. Its acceleration is average for the class, but its top speed is lacking for a Muscle car. The suspension and direction setup also cause it to have a very wide turning radius causing massive under-steer and making maneuverability quite the challenge. Fish tailing is not uncommon due to its engine power. Durabilty for the Rat-Loader itself is much lower, taking only a few collisions for the wheels to get jammed.

Possibly due to its worn condition, the engine seems to have slow response, at it takes a while to reach its max RPM when accelerating with the handbrake applied. This is also evidenced by its gear shifting ratio.

A Rat-Loader wreck, seen at The Lost MC Clubhouse in East Vinewood.

A Rat-Loader with no hood, grille, fenders, stock engine bay and stock exhaust.

A bedless Rat-Loader, acquired through a glitch. (Rear quarter view) 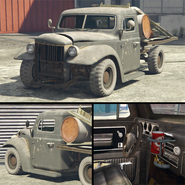 The Rat-Loader on the updated Rockstar Games Social Club.

The Rat-Loader in the cinematic preview on Rockstar Games Social Club.