Standard White - 100%
“One driver, two seats, three wheels, a straight four under the hood, and five minutes before you're upside down on the freeway wondering how any of this ever made any sense at all. It's the kind of package deal you can only get from BF.”

The BF Raptor is a roadster trike featured in Grand Theft Auto Online as part of the Bikers update, released on October 11th, 2016, during the Daemon and Raptor Week event.

The vehicle's design and name are based on the BMW-powered, Campagna T-Rex trike, judging by the open-cabin design, similar body shape and side intakes. The car features various "RAPTOR" markings around the body, which uses a cursive pattern similar to the "T-REX" markings from its real-life iteration.

The Raptor features a rather compact design, being comparable to the Bifta and most vehicles manufactured by the same company. The Raptor's overall bodywork is wedge-positive, while the drivetrain and chassis itself remain completely level. In the front area, the vehicle's hood is in the shape of a curved-edge triangle and gradually becomes thinner towards the front. Numerous grooves are seen in the hood and a triangular grille at the tip of the nose, as well as a grille beside this at either side of the hood. On top of the hood are small twin-circular headlamps which stick out of the vehicle in a cylindrical shape. Various steering arms are found protruding from the nose, attaching to the wheels. These front wheels are covered by small fenders.

On the middle section, the sides have an angled profile that aligns with the front, together with long-profile side intakes. These intakes lead to the rear-mid mounted engine. On the cabin area, a half-windscreen is mounted onto the two main A-pillar tubes and two small wing-mirrors are seen mounted on thin supports, while the B-pillar tubes are covered with padding and connect just in front of the rear arch. From the A-pillars, there is a roof section with another scoop leading to the rear. Two black pipes are seen behind the seats and exiting from the rear of the roof scoop, which transfer air into the engine bay.

On the rear section, the bodywork itself rises at the rear to reveal the single rear wheel and make space for the exhaust system, and as such, narrows into a thin "lip" which ends just above the wheel. Said thin lip holds the set of circular tail lights, with the two central lights being the brake lights, and the outside lights being the turning lights. Another light strip is seen above these. Below the lip, there is a black plate holder with the license plate on the center and the two rectangular reverse lights. The rear wheel is supported by a suspension spring and linkage fixed to the rear axle and bodywork, while the engine partially seen hiding under the body of the car provides transmission through a chain drive. Two exhaust tubes can be seen running beside the wheel, with a carbon-fiber finish around it.

The open interior reveals a small set of analog dials and a digital display in between together with a digital radio display on the center. These components are part of a dedicated "Raptor" dial set, which shares the same set from the "Prototipo White" dials found on the X80 Proto. The steering wheel is supported by an exposed steering column, while the interior is fitted with racing seats.

The primary color is mostly applied onto the bodywork and the interior, while the secondary color applies in the form of a stripe running from the hood and towards the rear section, as well as the steering arms, pillar tubes, rear-view mirrors, dial panel, gearbox transmission tunnel, part of the racing seats, the rear section and rear wheel linkage. In addition, the "RAPTOR" markings found on the seat belts, B-pillar tubes and rear section are painted with the primary color, while the ones found on the front left of the hood, headrests and right side of the dashboard are also painted with the secondary color. It uses a set of wheels similar to the "Chromatic Z" high-end rims, which are also available in Los Santos Customs.

As expected from a vehicle in the Sports class, the Raptor performs well. It does not quite match the typical sports cars in its class, however it is still very quick and has nippy handling. The single rear wheel, contrary to first-time expectation, does not prove problematic in cornering or reversing, and still remains perfectly stable.

Due to the singular rear wheel, bumps and curbs in the road severely affect how the Raptor handles. Passing over bumps at high speeds will most likely cause the Raptor to spin out and lose speed. Hitting bumps from the side of the rear wheel also cause this to happen. In addition, reversing the car may cause a slight offset upon initial acceleration, so one has to correct it whenever the player requires reversing the vehicle. The light bodywork also means the car cannot push vehicles or obstacles away with ease, but makes up from the lack of bodywork deformation, meaning collisions would not affect its steering.

The Raptor is powered by an inline-6 engine, based on the box-shaped engine and the six exhausts pipes coming from the engine bay. Said engine is coupled to a 6-speed gearbox in a rear-mid engine, rear wheel drive layout. The simplified rear wheel drive system makes the Raptor even lighter than the vast majority of the cars, including the Panto and the X80 Proto, explaining the good speed. The vehicle shares its engine sound with the Entity XF, being extremely high-revving, unusual for its kind. It also produces an engine ignition sound similar to the Vortex and the Shotaro. 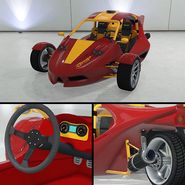 The Raptor on Legendary Motorsport.

The Raptor on the updated Rockstar Games Social Club.

The Raptor in the cinematic preview on GTA Online Rockstar Games Social Club.