Standard White - 100%
“Everything else from the 80s has aged. The Rapid GT Classic has only matured. Like a fine claret or a really good boob job, each passing year adds something mysterious to its allure. Sure, that new sports coupé is half the weight, and it has a cleaner transmission. But trust us: get inside this vintage, experience the kind of technique and self-assurance only time can bestow, and you'll never waste your time on a younger model again.”
— Legendary Motorsport description.

The Rapid GT Classic is primarily based on the 1972-89 series Aston Martin V8, as seen through in its fog lights, stock side mirrors and the lip at the end of the boot. There are some minor influences from the 1969-72 series Aston Martin DBS V8. The side skirts, side vents, tail lamps, grille and the rear bumper are reminiscent of the ones found in the Jensen Interceptor III. The single headlight setup and rim design seem to be borrowed from the 1968 Ford Mustang.

Depicted as the older generation of the Rapid GT, the vehicle assumes the same two-door, front-engine layout, but its design is more squared. Its front end features a chrome split grille, a bumper with two vertical defenses and four rectangular foglamps that are functional when the high beams are active. The outer edges are occupied by the two circular headlamps and the two split rectangle turn signals, both featuring chrome details around them. The bonnet has a simplistic design and the manufacturer emblem can be seen in front of it.

The sides are distinguishable by the flared arches, the twin vents on the front fenders and the chrome strip at the bottom, with the door handles, rear-view mirrors and side marker lights also finished in chrome. The greenhouse area also features chrome trim around the windows.

The rear of the car features a small boot with a lip on the end bearing the silver "DEWBAUCHEE" lettering, followed by a flat panel with the chrome housings on the edges, having the tail light sets. A chrome bumper protects the rear, with the license plate seen below it. The lower portion has two mouldings for the exhaust tubes.

The Rapid GT Classic has a mostly unique interior with a wooden trim and steering wheel, leather seats, and manual gated shifter. The dashboard dials and meters are similar to the ones used in muscle car interiors, but differently arranged.

The Rapid GT Classic has decent handling for its class. It has sharp turning capabilities which can lead to oversteer that can be quite challenging at high speeds. The high output V8 engine seems to be a higher-revving variant of the modern Rapid GT engine, which shifts at around 7500rpm in full throttle, and rev limiter set at 8000rpm. Braking is below average when compared to higher end cars in its class. Crash deformation is acceptable.

The Rapid GT Classic is powered by a single-cam V8 engine. Unlike other V8 engines found on other cars, this one sports additional details over the centre to give the impression of a slightly larger size. With the supercharger blowers applied, the engine can have additional pulleys that seem to be properly placed on it. 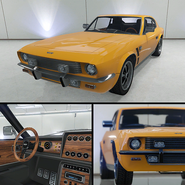 The Rapid GT Classic in the cinematic preview on Rockstar Games Social Club.

A Rapid GT Classic featured in Big Mind Big Money, an artwork by Antonio Cantú at The Diamond Casino & Resort. 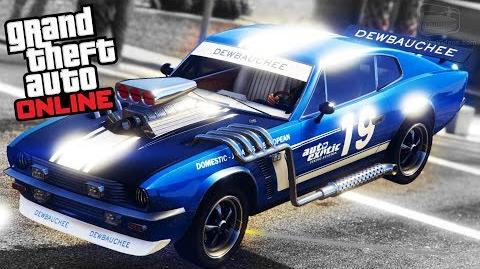