supercar_6_eur_v8
“The ultimate blend of luxury, refinement and breeding, the Rapid GT is a British supercar that's as superior and classist as its fellow countrymen, but without the need for self-deprecation.”
— Legendary Motorsport description.

The Rapid GT's design strongly resembles the Aston Martin V8 Vantage Roadster in the rear and main body of the car, and the 2011 Ferrari California in terms of grille and exhaust arrangement. The headlights seem to be based on the Porsche Carrera GT, and the tail lights are styled more to Aston Martin designs.

The Rapid GT is essentially a two-door version of the Exemplar, sharing the initial front and rear fascias and main body design. The front face of this car is comprised of a range of curves. The bumper is dominated by the appearance of four grilles. Above the CFRP front spoiler, there are three grille sections all identical in height; the central section accounts for a third of the bumper's width. The largest of the four grilles is located centrally above the other three. The vehicle features carbon-fibre-lined headlight housing, which are positioned in an impressed area of the front facets which also bulges out. They are outlined by two convex curves; however, the outer edge can be divided into two curves. The lighting comes from two circular lamps and then an LED strip in the bottom area of the headlamp unit. Two-thirds of the bonnet width is accounted for by an elevated section a short distance behind the headlights. There is an impression either side of the elevated section that channels air into an intake.

The main body area is very linear; the main body line is straight and runs from level with the lower edge of the wheel-arch face to the level with upper edge of the rear wheel-arch face. The upper body line runs along from the top of the front flared wheel-arch through and beyond the rear flared arch, a small, black, ovular rear-view mirror rests on the point where this line meets the A-pillar. For the roadster form, there is a retractable black soft-top that stores under a metal and fabric flip-up lid. The fixed roof form of the car features a long, elegant C-pillars. Both versions of the car feature frameless door windows and lack B pillars. There is an air vent parallel with the front wheel-arch curve just behind the front wheel-arch. At the point where the intake meets the main body line there is a small turn indicator lamp. At the bottom of the body, the lower edges of the flared arches are connected by a ledge.

The rear face of the vehicle has an aggressive design style. The rear lights sit an impressed section of the rear face, a short distance from the top. The rear lights are split into three sections, the top and bottom sections having red lighting, the middle section having orange lighting and closest to the centre, white lighting. The manufacturer logo in located centrally just below the impressed area's edge. On the rear bumper, parallel to the inner edges of the rear lights there is an impressed area where the license plate is mounted. Below this area, three-quarters of the bumper width is occupied by a CFRP diffuser unit. Either side of this unit there are stacked twin-tipped exhaust tips located in vent, whose inner edges are parallel to the outer edges of the diffuser.

The car is available in two versions that share the same name: a standard hardtop version and a convertible version with a soft, retractable roof. Both versions have their primary colours applied to the body and the interior stitching, although the convertible variant features secondary-coloured seatbelts. The car uses a set of wheels that are identical to the "Blade" high-end wheels also available in Los Santos Customs. The Rapid GT also features large cross-drilled brake rotors which are coupled to red, six-piston brake calipers, mounted towards the rear of the wheel.

The vehicle has very good acceleration, but relatively average top speed for the class. Its handling is acceptable, but is otherwise lacking in both response time and cornering radius. It may oversteer at certain corners, but correcting oversteer is easy. Crash deformation, as with most other non-DLC sports cars, is poor, and the car frequently has bent axles or jammed wheels after one or two collisions at speed.

The engine model seems to be loosely based on a V8, whereby it assumes a similar design to the Ferrari 360's F1310 DOHC V8 engine. Similar to the Furore GT and Exemplar, it features two cold-air intake systems coming from the upper grille (ram-air intake) of the car.

A convertible Rapid GT with its top down. (Rear quarter view)

A red Rapid GT and a white 9F, during the mission "Franklin and Lamar."

Rear quarter view of the coupé version of the Rapid GT, during the mission "Legal Trouble."

Franklin drives away from a pursuing Interceptor in a roadster version of the Rapid GT. 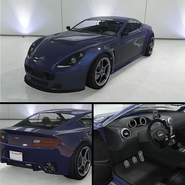 The Rapid GT on Legendary Motorsport. 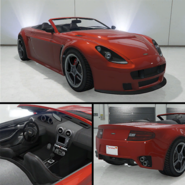 The Rapid GT (coupé) placed incorrectly in the Massacro in the cinematic preview on GTA V Rockstar Games Social Club.

Pre-modified variants of the Rapid GT coupe can be seen driving around Vinewood randomly, particularly along Vinewood Boulevard and Eclipse Boulevard. The following two sets may spawn only in story mode. The vehicles appear in set color sets with the same modifications. 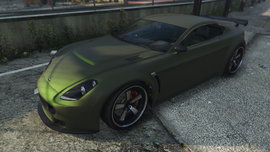 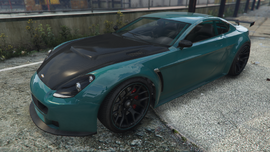 Like the randomly spawning modified Rapid GT coupes in Vinewood, two sets of Rapid GT coupes may spawn outside Los Santos Customs, pre-modified. These again only spawn in single player. The vehicles appear in set color sets with the same modifications. They will not spawn with any of the default extra components. These variants are named "LS_CUSTOMS_MODDED_SP" and use the exact same modifications and colors as the Vinewood Modded Rapid GT sets.

The Rapid GT coupe is part of the vehiclemodelset, "GENTRY_MANNOR". This set of cars is exclusive to the Rapid GT, Dubsta and Carbonizzare.