"It's not like in Rapefest Quark Zoom, where they subvert the clichés by embracing them. And then undermining them by making them all true. But then that's written by a genius. Whereas your show is such a hack job."
― Quote by an anime fan in Princess Robot Bubblegum.

Rapefest Quark Zoom (レイプフェストクォークズーム) is a Japanese anime series mentioned in the HD Universe of the Grand Theft Auto series.

The Rapefest Quark Zoom logo also appears in Grand Theft Auto Online with the Arena War update, where it can be seen on the Nightmare Scarab with the Nut House livery equipped. 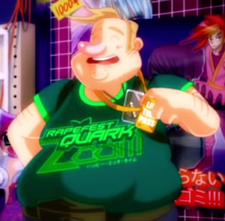 A Jugular with a Shiny Wasabi Kitty livery.

The Sugoi with a Shiny Wasabi Kitty livery. (Note: The Rapefest Quark Zoom logo appears on the livery.)

The Blista Kanjo with a Shiny Wasabi Kitty livery.
Add a photo to this gallery

Retrieved from "https://gta.fandom.com/wiki/Rapefest_Quark_Zoom?oldid=1212615"
Community content is available under CC-BY-SA unless otherwise noted.