View source
watch 02:59
Wiki Targeted (Games)
Do you like this video?
Play Sound
For the mission in GTA III, see Ransom (GTA III).

Taking a photograph of Gracie Ancelotti

— Gordon talks to Niko when he gets to the safehouse

Ransom is a continuation of the mission I'll Take Her in Grand Theft Auto IV. The mission also appears to crossover with The Ballad of Gay Tony mission Ladies' Night.

Gracie Ancelotti's father doesn't believe that Gracie is kidnapped, but thinks she is out with "some guy", so Niko heads over to the safehouse where Gracie was dropped off at the end of the last mission to take a photo of her to send to her father. Niko hits Gracie to get her attention and takes a photo of her on his mobile phone. The mission is completed upon Niko leaving the building. 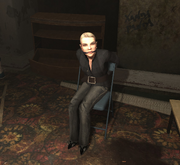 Gracie, tied up, ready for a picture.