GTA Wiki
Register
Don't have an account?
Sign In
Advertisement
in: Characters, Characters in The Lost and Damned, Deceased characters,
and 4 more
English

The Random Biker (as dubbed in the credits) is a character in the Grand Theft Auto series who appears as a supporting character and a minor antagonist in The Lost and Damned.

Nothing is known about the biker, and his real name was never revealed. He is a member of The Lost Brotherhood, being loyal to Billy Grey and Brian Jeremy, and seems to be against Johnny Klebitz.

The random biker is first seen after Billy, Johnny and Brian attacked a few Angels of Death bases. Billy reveals to the random biker and the rest of the bikers that Jason Michaels was killed by a Polish or Serb hitman, under the orders of Jason's girlfriend's father. After Billy ends his speech about Jason, the random biker drives from the place.

The random biker appears again after the failed drug deal with the Triads and Billy's arrest in Dragon Heart Plaza. He runs alongside Johnny, Jim and Brian to the club house. An argument between Johnny and Brian starts, with Brian accusing Johnny of calling the police so they would arrest Billy, and he (Johnny) will become the leader again. During the argument, he sided with Brian. However, for unknown reasons, he then goes with Johnny and Jim, leaving Brian alone.

After Brian leaves the gang, he founds a new biker gang, that contains members who are loyal to Billy. The random biker joins the gang, and becomes Brian's right-hand man. 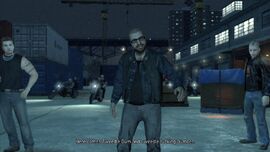 The Random Biker in "End Of Chapter", on the right.