GTA Wiki
Register
Don't have an account?
Sign In
Advertisement
in: Housing Projects, Locations, Locations in GTA V,
and 3 more

The projects are controlled by the Los Santos Vagos, and contains a high presence of Hispanics. The projects consist of 9 individual buildings, with 4 nearby parking lots for residents.

The projects have a high presence of Vagos gang members, dealing and hanging around in the area. Vagos are seen in groups of 3-5, with as many as 20 gang members within the surrounding area. They have their gang vehicles parked at the parking lots in the area, including special yellow Mananas and Tornados and black and yellow Buccaneers. Several graffiti tags are also visible in the area. Several large graffiti murals in the area say "In Memory of Alphonse" or "In Memory of Jose", most likely in memory of the deaths of high ranked members of the Vagos that represented in the area. 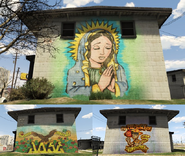