Ran Fa Li is the leader of the Red Gecko Tong Triads in San Fierro. Wu Zi Mu goes to great lengths to impress Ran Fa Li due to Ran Fa Li's higher ranking in the Triads. He is speechless throughout the game and communicates via a series of grunts with the assistance of a translator. Carl Johnson does a few jobs for Wu Zi Mu on behalf of Ran Fa Li, including retrieving an important package from the airport and driving a vehicle out into the countryside as a decoy, to lure the Da Nang Boys away from Wu Zi Mu's Betting Shop in Chinatown, where Ran Fa Li is hiding from them, which in turn earns him the trust of Ran Fa Li. Ran Fa Li is also the third stakeholder in the Four Dragons Casino in the southern tip of The Strip in Las Venturas (along with Wu Zi Mu and Carl Johnson). 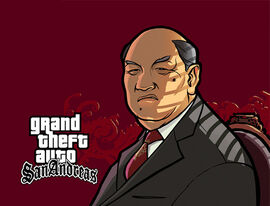