Standard White - 100%
“The trike to end all trikes. Fast, fierce and OTT, when this hits the road, the cops won’t know whether to arrest you for speeding or indecent exposure.”
— Career Builder description.
“There was a time when no respectable motorist would admit to owning a trike. It was a kink you worked out on your own, once everyone else was in bed, behind sound-proofed garage doors. And then one day the Rampant Rocket launched, and everything changed. Once that supercharger found its way between your legs, it was impossible to be discreet, and impossible to feel ashamed. This is what liberation looks like.”
— Legendary Motorsport description.

The Western Motorcycle Company Rampant Rocket is a custom tricycle featured in Grand Theft Auto Online as part of the continuation of The Diamond Casino & Resort update, released on October 31, 2019, during the Halloween Surprise 2019 event.

The Rampant Rocket is based on the Rocket II Trike, seen in the overall design and layout.

The Rampant Rocket features a complex build, where the front wheel is connected to the vehicle by a C-shaped frame on the left side and supported by a horizontally-mounted shock absorber, with a long steel rod on the left side that provides the steering capabilities. The frontal section of the bodywork is sloped and features four small vents on the upper side. The engine sits in an open section and has small square headlights right above the exhaust stacks, together with a protruding primary drive on the front with a fully-animated Auto Exotic timing belt and pulleys.

On the section behind the engine bay, there is a small panel holding the long handlebars and the "Sports Bike" dials seen in motorcycles such as the Akuma and the Bati 801, along with rear-view mirrors beside it, a red cable on the left handlebar and the exhaust pipes on the lower side. The rearmost section features a small black seat over the axle and the corresponding articulated arms, transmission shafts and suspension springs for the large rear wheels. The rear end of the axle houses the circular tail lights, the license plate and a saddle bag.

The Rampant Rocket can be considered as a heavier but faster version of the Chimera. Its handling is reasonable at lower speeds and can take corners with ease, as expected from a motorcycle. At higher speeds, its suffers from some understeer, struggling a bit to weave through traffic — though getting to high speed is another weak point.

Despite its handling and appearance suggesting it is a drag-style vehicle, its acceleration and top speed are lacking, outpacing only the slowest motorcycles like the Bagger or Wolfsbane. Although unable to wheelie, its speed can be slightly increased by leaning forward. Overall, the Rampant Rocket is best considered a novelty, unsuitable for use in racing or as an escape vehicle.

Similar to the Chimera, its odd physics handling prevents it pitching and rolling while in midair after a jump, causing to either nosedive or remain at the same angle as when it lifts off. This makes the vehicle unsuitable for stunt jumps. Being a long vehicle, it is impossible to perform wheelies and the chances of getting stuck is greater than most motorcycles. Also, going over curbs on the road has the tendency to fling the vehicle up, causing the user to possibly get knocked off of it, resulting in damage or even death. Despite the seemingly clear room for the front wheel, it struggles to go over moderately tall obstacles.

The Rampant Rocket is powered by a big-block V8 engine fitted with a supercharger, coupled to a 3-speed gearbox and powering the rear wheels. The engine sound is shared with the Deviant, being a slightly higher-pitched version of the Imperator and Dominator ones. 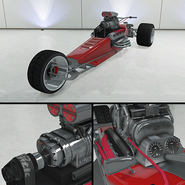 The Rampant Rocket on Legendary Motorsport.

The Rampant Rocket on the updated Rockstar Games Social Club.

The Rampant Rocket in the cinematic preview on Rockstar Games Social Club.