“Ever looked at a city-center traffic jam and seen nothing but a long, glorious opportunity? It doesn't have to be a dream: with BF's Ramp Buggy, yesterday's gridlock becomes today's meteor shower in your rearview mirror.

Note, the production model of this vehicle has reduced armor plating.

The BF Ramp Buggy is a custom ramp car featured in Grand Theft Auto Online as part of the Import/Export update.

Based on its name and design, the Ramp Buggy appears to be a heavily-customized Dune Buggy, where it takes the resemblance and purpose of the Flip Car used in Fast and Furious 6.

The vehicle assumes an enlarged chassis with a reinforced cage and body panels, where the front area assumes a wedge-shaped appearance, intended to slip under cars. The sides of the vehicle are seemingly narrower and features additional frames and panels for the rear wheels, while the cabin area is reinforced with various frames on the front and on the roof area. The rear of the car is mostly covered by the rear panels, with additional frames over the engine bay. Its underside is also covered by additional panels, leaving part of the engine exposed.

The interior of the car, while similar to the Dune Buggy and the Space Docker, features an enclosed front, no longer exposing the steering column. In addition, it uses a set of analog dials and numerous switches on the upper section/dashboard, derived from race cars such as the RE-7B and the ETR1.

The car is only seen with a rather worn appearance, having heavy scratches on the front end. The primary colour is applied on the body panels, while the secondary colour is applied on the bodywork frames and protective cage. The wheels share the same rim design as the Dune Buggy and Injection, wrapped in high-profile tyres with standard treaded pattern and wider track on the rear ones.

The Ramp Buggy's behaviour is different compared to its off-road equivalent, as it has a low ride height to make slipping under cars efficient and appears to withstand collisions better due to the reinforced chassis. However, the car only has average speed and acceleration due to its weight, and its handling appears to be downgraded, difficulting its use on off-road environments.

Prior to the Arena War update, the Ramp Buggy could be damaged by ramming multiple cars, causing its engine to emit smoke from the sides. If the player was still ramming cars after said warning, the engine will stop working, disabling the Ramp Buggy. This issue was shared with the Phantom Wedge.

Despite having no ballistic weaponry attached to the vehicle, the ramp is considered to be a weapon itself, meaning the use of Passive Mode is not allowed while in the Ramp Buggy. The same applies to the Phantom Wedge.

The vehicle features a single-cam Flat-4 engine derived from the Dune Buggy and many BF off-road vehicles, coupled to a 6-speed gearbox in a rear engine, rear wheel drive layout. The engine sound is an edited variation of the one used in the Dune Buggy and the Injection, with a lower pitch and a slightly smoother tone.

The spoiler variant of the Ramp Buggy (rear quarter view)

Seen in an official pre-release screenshot.

A Ramp Buggy using the ramp to flip another vehicle out of the way. 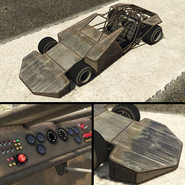 The Ramp Buggy on the updated Rockstar Games Social Club.

The Ramp Buggy in the cinematic preview on Rockstar Games Social Club.