USS Numnutz
Kosatka
The Ramius is an uncontrollable Submarine featured in Grand Theft Auto Online as part of the Doomsday Heist update.

The vessel appears to be based on the Typhoon-class nuclear-powered submarine, having the characteristic rounded front end with horizontal diving planes. The vertical sail is located in the back half of the boat. It has a more square-shaped aft section and shrouded propellers. However, it appears to be much smaller compared to the real life submarine.

While not directly referred as such in-game, the vessel has "Ramius" and "2701" painted on the sail and tail, as well as a Russian heraldic shield featuring a two-headed-eagle and 1896. The name is an obvious reference to Captain Marko Ramius from The Hunt For Red October, also featuring a Typhoon class submarine.

The accessible interior of the submarine contains three decks: 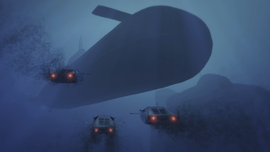 Strombergs approaching the submarine in the Doomsday Heist update trailer.

Size comparison alongside the Kosatka.

Insignia found on the front of the sail.

Missile hatches - note: only 6 exterior hatches despite 12 silos in the interior.

Top hatch on the sail.

Ramius exploding and sinking shortly after the protagonist escape.

Bridge looking the opposite way.

Displayed schematics in the control room.

Throughout the Act II of The Doomsday Heist, it is mentioned that the submarine was seen off the coast of San Andreas, and has been the central objective in the setup missions.