Ostrowski is a Bail Bond target wanted on multiple charges of check fraud, workers comp fraud and money laundering. When Maude Eccles tracks him down, she enlists Trevor Philips to capture him. Trevor has to track him down, and he is located at Davis Quartz, as a friend let him hide out there, and he had spent the last few weeks in a bulldozer. He is a middle-aged male, with a wife and children. He has grey hair and brown eyes. Ralph uses a generic trucker pedestrian model, the same one used for the mechanic from the Tow Truck mission. He is wearing a shirt with the Pisswasser logo on it.

If captured alive, he discusses his scam with Trevor, in his own words, he says that he was only the middle man in a shell company that was using a minimal workers' compensation insurance policy to charge subcontractors a fee to use that company as a dummy paper trail for their undocumented workers.

Trevor says that he is probably the most boring criminal alive and the jail will be a good place for him. When describing his own time in prison, Trevor says that the jail was very freeing and that he even enjoyed himself there. His tone leaves the impression that he had sexual relations with other prisoners in jail, though this could have been a joke on his part.

"Hey Trevor. I got this tip-off this particular reprobate has been hiding out at the quarry. Slippery character by all accounts so you might have a runner on your hands."
―Maude 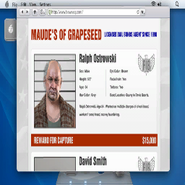 Maude's laptop screen showing his file.
Add a photo to this gallery 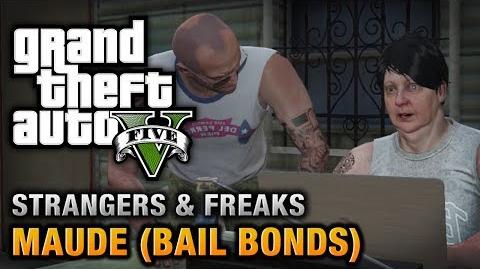 Retrieved from "https://gta.fandom.com/wiki/Ralph_Ostrowski?oldid=1270382"
Community content is available under CC-BY-SA unless otherwise noted.