The Rail Gun is a new weapon set to appear in the next-gen version of Grand Theft Auto V, the weapon will only be available to those returning to GTA V from the current-gen version.

The weapon appears to be futuristic and unloads powerful rounds of explosive ammunition upon foes. 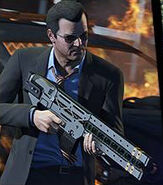 Michael De Santa using the Rail Gun.
Add a photo to this gallery

Retrieved from "https://gta.fandom.com/wiki/Rail_Gun?oldid=707453"
Community content is available under CC-BY-SA unless otherwise noted.