Wikipedia has an article on:
Railgun

“All you need to know is - magnets, and it does horrible things to the things it's pointed at.”
— Ammu-Nation description.

The Coil Railgun is an experimental weapon featured in the Enhanced Version of Grand Theft Auto V, and briefly in Grand Theft Auto Online. This weapon is exclusively available to players returning to the enhanced version from the original Playstation 3 or Xbox 360 versions.

A railgun is a weapon that fires inert metallic rounds at velocities higher than the speed of sound using an electromagnetic effect. As such, it has incredible range and accuracy in addition to massive kinetic energy. However, at the time the weapon was introduced, railguns are still considered to be prototype phase and due to a myriad of issues, such as power generation and heat dissipation are limited in size and portability to fixed (usually naval) mountings. Portable railguns do not exist outside of theoretical models.

The Railgun is a high-tech military prototype Railgun designed for infantry use, adopting a carbine-like appearance. The weapon features a very linear design and two electrically-powered rails on the front, with a small fixed stock on the rear and what appears to be the vent units behind the power source. The Railgun also has a transparent sight with a triangle-shaped reticle on it. A green light is visible when the Railgun is loaded and turns red when fired.

The weapon bears a strong resemblance to the ARC-920 featured in the Halo series.

According to the text on the side of the weapon, the Railgun is property of the United States Government.

When equipped, the Railgun emits a low pitch humming sound, which can be more easily heard when in first-person view. When fired, a flash of electric arc can be seen in the barrel, in which it will be followed by a small explosion in the muzzle (a sonic boom) after the rounds are fired. Attempting to fire the weapon without ammunition will produce a unique static sound, as opposed to the standard "click" of conventional weapons.

The Railgun fires kinetic energy penetrator rounds at very high velocity (supersonic speed). In real life, the rounds travel much faster than regular firearm bullets due to its supersonic velocity, although this cannot be observed in normal gameplay. On impact, the kinetic energy rounds are capable of causing massive damage, which are on par with the Rhino's main cannon. That is, it can destroy any unarmored vehicle in one shot.

However, this weapon requires accurate shooting because of its poor blast radius, any shot that missed deals no damage, especially when one hits a vehicle's window and the projectile can easily pass through both open side doors of a helicopter.

The Rockstar Games Social Club website incorrectly states the Railgun is automatic while in-game it is actually single-shot. Assuming that the feature is limited by the single-round magazine, the Railgun would mechanically be able to fire in an automatic mode.

Since it is a single-shot and it takes multiple seconds to recharge, this weapon is good at dealing with enemy vehicles, but is less effective against groups of enemies on foot. It is also an effective backup weapon to be used in missions that involve heavy shootouts, such as Heists.

Based on the markings of the gun, it has an energy capacity of 1.21 Gigawatts. 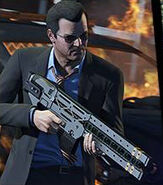 Michael using the Railgun in a shooting range.

The Railgun barrel changes to red after firing a round.

The beam of "light" fired from the weapon.

The weapon's chamber during firing. 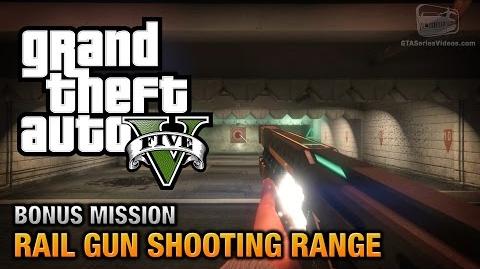 In Grand Theft Auto Online, it can be found and used in some Adversary Modes and also a Bunker Supplies/Steal Mission regardless of whether the player is a returning player or not though it cannot be retained outside of these jobs.