"Have a donkey of a time with this product battle in El Burro Heights. Rival dealers decide coveting thy neighbor's goods isn't such a bad idea after all, as they try to bank their rival's product back to their own base of operations."
―-Match description

The Raid is unlocked after Rank 14 is achieved. It takes place in the estates of El Burro Heights.

The players must collect Duffel Bags which are located at each of the bases. The bases are located on two short lanes; an unnamed backstreet off Innocence Boulevard, and the other base is located near Amarillo Vista, on the main road.

Basic and classy vehicles are most common, vehicles like the Tornado and Emperor are found on the main roads, whilst muscle cars such as the Gauntlet and Pheonix are found parked in the driveways and side streets. Sadlers are also found.

Weapons are basic, due to the low rank required to unlock the mission, Micro SMGs and Pistols are most common. 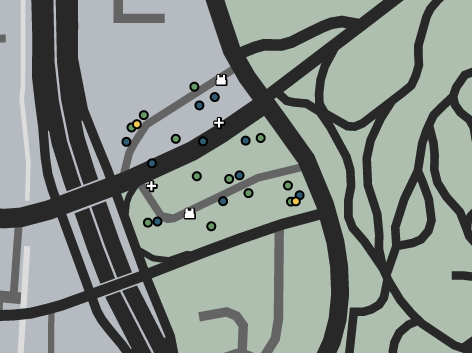 Retrieved from "https://gta.fandom.com/wiki/Raid:_Neighbor_Hoods?oldid=975016"
Community content is available under CC-BY-SA unless otherwise noted.