hatchback_5_eur_4_cyl
“One of the best-selling mid-size crossovers on the market today. Enjoy the feel and functionality of an SUV without everybody berating you about your carbon footprint.”
— Southern San Andreas Super Autos description.

The Radius is heavily based on both the 2011 Ford Edge and late model Dodge Caliber; however, the rear lacks the rear-mounted license plate that the Edge has in the middle.

The frontal area features a bulky bumper that houses a meshed vent, which spans about half the car's width and is partially covered by the license plate on the center. The upper area is dominated mostly by the three chrome grilles with the central-mounted Vapid logo on the middle one, followed by the set of rectangular headlamps beside it. The hood features small elevations, which are slightly more prominent as they approach the windshield.

The sides of the car feature triangular air intakes at the top of the front wheel wells, which have a silver/chrome finish on the surroundings and the two horizontal separations. The wheel wells and skirting area bulge outwards, which seemingly merge with the bumpers on both ends, together with small extensions on the rear that act as the mudguards. The rest of the car's body is plain and has no character lines, although there is an upper body line starting from the top of the front wheel wells and slightly angles upwards towards the rear end, as well as black horizontal door handles. The same cabin is rather tall and makes use of black trim around each window glass, with body-colored mirror wings mounted near the A-pillars. The roof is relatively flat in appearance and features a spoiler above the rear window.

The rear end of the car is mostly occupied by the rear compartment door, which features smooth lines between the inner corners of the tail lights, with the upper one curved upwards. The middle section of the same compartment door holds the Vapid logo on the center below the upper line and silver lettering above the lower line, which displays the car's name on the driver side and the engine specifications on the passenger side, while the bottom area of the compartment door curves inwards and sits above the bumper. The edges of the car house large tail light units, each one consisting of an upper brake light and lower reverse/turning lights, all of them enclosed by C-shaped red main lights. The bumper is relatively bulky compared to the rest of the car's rear end, having a dedicated central section for the license plate and two mouldings for the exhaust pipes. In the enhanced version, the vehicle shares the interior with the Cavalcade.

The vehicle spawns in a variety of single-tone and two-tone paint jobs, where the primary color is applied on the bodywork and the secondary color on the lower sides, cabin pillars, mirror wings and roof. It uses a set of seven-spoke rims also shared with the Gauntlet, wrapped in medium-profile tires.

Being a compact SUV, the Radius is a good example of a sleeper, being underwhelming on the exterior but having really good performance on the road. Its active AWD characteristics give it excellent acceleration, though oversteer is still present and can pose a problem in races. The Radius sits very low to the ground and has a decently stiff suspension, giving it sporty handling for an SUV. With a few tuning parts, it can compete with sportier cars like the Sultan and Blista. However, its durability is not the best, as its not designed to withstand heavy collisions with its bodywork susceptible to deformation, and will start to suffer performance-wise if collided with heavier vehicles or walls too often.

The Radius is stated to use a 220ci (3.6L) V6 engine, yet the in-game model is a V8 engine, which is coupled with a 6-speed gearbox and powers all four wheels with a torque distribution of 60% to the front wheels and 40% to the rear. The crossover's engine has a grunty and unique sound with plenty of torque, being similar to a typical cross-plane engine with the roar it produces. A notable drawback to its performance is its transmission, which will only shift at very high RPM. Only a slight slope on a road is necessary to make it hang and refuse to shift. 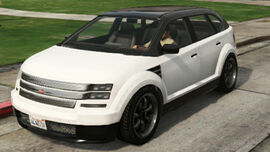 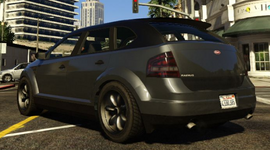 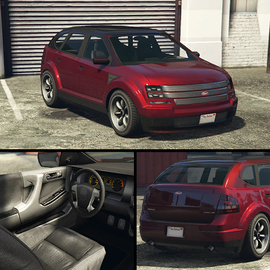 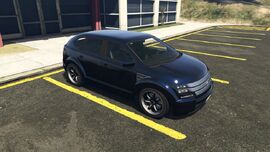 The Radius on the updated Rockstar Games Social Club. 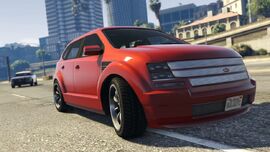 The Radius in the cinematic preview on Rockstar Games Social Club