GTA Wiki
Register
Don't have an account?
Sign In
Advertisement
in: Missions in The Lost and Damned, Side Missions, Missions, Races

Races in The Lost and Damned

There are Bike Races throughout The Lost and Damned, the first DLC pack for Grand Theft Auto IV, which can also be played in multiplayer.

Races occur throughout Liberty City. The starting line is indicated by a red and white motorcycle helmet icon on the map.

Unlike, in the original version of GTA IV, Bike Races in TLAD are:

Just as in Brucie's Races, the race must be completed by driving through each checkpoint in the race. The number of laps in each race depends on the length of the path given from start to finish in the race, where smaller distances usually lead to more laps in a race. The race can only be won by coming in first place at the end of the final lap. 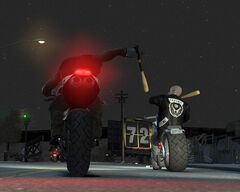 Whilst racing, the player has a bat, which can be used to knock other racers off their bike.

/LMB will make Johnny Klebitz hit to the left and

/RMB will make him hit to the right (standard controls). The longer the player holds the button, the more powerful the hit is. Hitting the button quickly will take several hits to knock a racer off their bike, but holding it for the maximum time will knock them off first hit. The other racers can hit back, taking the player off course. 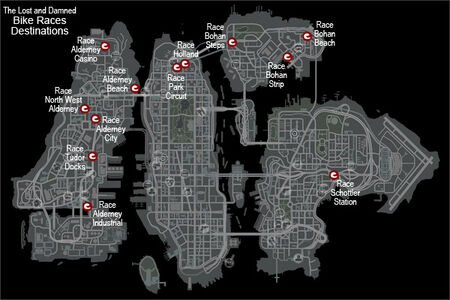 The reward for coming in first in all twelve races is a Hakuchou at your safehouses.

Completing all races is required to achieve the 100% completion.

Once all races are complete, the races can be replayed and one race will appear on the map closest to the player's last position after an activity or mission. 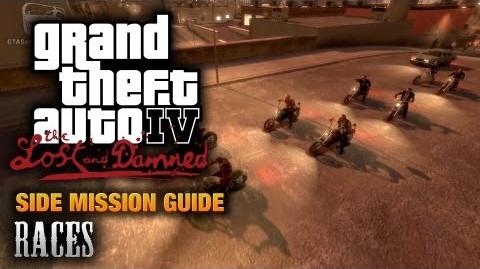