Races are a type of game mode available in Grand Theft Auto Online. They can be played alone or with up to 15 (30 in enhanced version on PlayStation 4, Xbox One and PC) other players. Races give the player rewards such as cash, JP and RP, even if the player does not win the race. There are six different racing modes: Land Races, Bike Races, Water Races, Air Races, Stunt Races (after Cunning Stunts update) and Target Assault (after Southern San Andreas Super Sport Series update) races.

There are also Impromptu Races that can be activated at any time during Free Mode.

The Land Races are divided into three different types: Standard (Lap and Point to Point), GTA (Lap and Point to Point), and Rally. Standard Lap and Point to Point involves players driving through various checkpoints in the track before reaching the finish. Standard Lap races involve repeated timed laps around a set course and Point-to-Point races run from a start point to a finish point in another location. GTA races are essentially the same as Standard/Point-to-Point races, but with weapons and power-ups enabled. The players can also exit their initial vehicle and steal a different one. Rally is a unique team-based format in which there are two players in each vehicle, the driver and the navigator. The driver is unable to see the checkpoints in the race, so the navigator must direct the driver through the points either with directional commands or voice commands using their microphone.

There were 42 unique Rockstar-created races at the start of GTA Online. Rockstar Games continues to release updates that includes new races. There are a virtually endless amount of player-made races that can sometimes even get officially approved by Rockstar Games; these are known as Rockstar Verified races.

A Non-Contact Race option was added in The High Life Update, which allows players to play standard races with collisions disabled between players' vehicles (other players appear as semi-transparent "ghosts") but players are still able to collide with non-player traffic, structures and other scenery. Slipstream is automatically disabled in non-contact races.

A standard lap race, has players race on a set course for a number of laps determined by the host. Typically, the default number of laps is 2 or 3, but they can be as high as 99 or as few as one. Players are timed against each other and against a "World Record" or "Personal" time; Every time a player runs a best lap, he/she will receive RP. RP is also awarded for "clean laps" with no collisions, and for leading an entire lap.

A point to point race is completed only by driving from a set start point through checkpoints to a set finish point. This allows for greater freedom in track design, ranging from simple straight courses through neighborhoods, to racing through massive, sprawling sewer systems and coast-to-coast style events.

A GTA Race uses the same course as a standard race (Laps or Point to Point), but with the inclusion of weapons, power-ups and the ability to leave your vehicle to acquire a new one. Players take whatever weapons they have access to with them into the race, allowing custom weapons to be used. Low tier weapons will also spawn along the track, with the ability to be picked up while inside a vehicle, albeit with very little ammo. When playing GTA Races with wanted levels on, the race can quickly become one-sided, as players without wanted levels will be able to rush ahead of other players being blocked by police and military blockades. When playing GTA Races with teams, the players are divided into pairs of two and spawn in the same vehicle.

Caution should be taken when in the lead, as GTA V's new car physics can greatly impair you. If your tires are shot out, you will immediately careen off the track, crashing and likely losing position.

Power-ups are not available in Air Races.

A rally race is a new mode introduced in GTA Online. It involves teams of 2 navigating through the same race tracks as standard races, with the driver being unable to see the checkpoints. The navigating co-driver has to provide directions to his teammate in the form of arrows displayed on the drivers screen, telling him when to turn, or by voice commands. This mode is very difficult for inexperienced players, and is even more difficult without microphones to use as communications between teammates. In this mode, voice communication is restricted to within teams, opposition teams cannot hear each other during a rally.

Through the Content Creator, players can create their own custom lap or point to point courses, setting the checkpoints and race details. Players can also add props such as barriers, ramps, and explosive objects. Power-ups and weapon spawns can be placed for GTA races. Stunt jumps can also be added, activating the stunt jump camera when a player drives through it. Once published, the race can be accessed from GTA Online and rated by other players. Like other jobs, a custom race can also be verified by Rockstar at which point they appear on the Free Roam map and can be accessed by all online players.

A course must be at least 0.62 miles (chosen due to it being equal to 1 kilometre) in length to be published.

Checkpoints are used to determine the routing of the course, including the start and finish lines. They are signified by a large vertical yellow cylinder, with a large blue arrow indicating the next point. Checkpoints in Air Races are shown by a horizontal halo which the player must fly through. Points are also shown on the player's map as yellow circles, though only the next two checkpoints will be shown on the map. The finish line is signified by a checkpoint with a large checkered flag in the center.

Checkpoints also serve as respawn points when a player vehicle is destroyed or the player manually selects to respawn (i.e. when they have gone so far off-course or their vehicle has become stuck).

Racers do not necessarily have to pass directly through the checkpoint; driving close to a checkpoint will count, though it will not be as immediate as driving right into the halo. This allows leeway on wide roads, divided highways, and when racing other players side-by-side. If a player misses a checkpoint, however, they will have to turn around or respawn and drive through it again, losing valuable time.

Slipstreaming, or drafting, is a technique used to gain speed in land races by running behind another driver. If enabled in the race settings, a wake of air will appear behind the car in front, letting you "see the air". When timed correctly, the player can "slingshot" past the driver in front. The one disadvantage is that the sudden boost in momentum could cause the player behind to collide with the player(s) ahead or traffic, wrecking themselves or other players.

While in real life slipstreaming can allow multiple cars to line up and go faster, this does not take effect in the game. The slipstream effect is also greatly exaggerated in game to the extent that vehicle dimensions (size; aerodynamics) are not taken into account – for example in an off-road race a Sandking XL is able to get a full slingshot effect from slipstreaming behind a Sanchez dirtbike.

Racers should exercise caution using the slipsteam prior to a turn – the effect of the slipstream replicates the effect of a loss of front downforce, reducing the efficacy of your brakes and increasing understeer.

Slipstreaming is not available in Non-Contact races.

Catchup, when enabled, allows drivers behind the leader to catchup to the front of the pack, preventing runaway victories and slightly reducing the advantage of players with custom engines and transmissions. Players that fall back at the start of a race get another chance at a good finish. On the other hand, it can leave the leader a sitting duck for a last second pass. While the effect of catchup is not blatantly obvious, an experienced racer can notice the boost in horsepower when coming from behind, or the absence of it once they are ahead.

Below is a list of every available vehicle by class. The player may also use any custom personal vehicles they own in the selected class, some of which are not available by default, providing that the host has allowed it. This can be changed in the lobby by turning Custom Vehicles on or off. This does not apply to Boats, Cycles, Helicopters or Planes as they cannot be customised.

Certain races will have locked classes and/or vehicles, particularly update-specific races introducing new vehicles. The grid size defined in the race may limit some classes to a sub-set of the available vehicles, this is particularly common in Off-Road races.

NOTE: Boats, planes, and helicopters are not listed by speed in the selection screen.

Stunt Races are an entirely new class of fast-pace races added to the enhanced version of Grand Theft Auto Online in the Cunning Stunts update. The races include extreme ramps, loops and hamster-tube like circuits.

Transform Races are another type of Stunt Races added in continuation of the Smuggler's Run update for GTA Online, treated as separate content. These completely reform the way Stunt Races function, in that the certain checkpoints transform the player's vehicle into another type of vehicle during the race - for example, helicopters, planes, boats, bicycles, motorcycles, parachutes and other land vehicles, to match the flow of the race. These are significantly longer races and tend to feature a theme, often consisting of one large prop which acts as the play area.

Issi Classic Races are another type of Stunt Races added as part of the continuation of the Southern San Andreas Super Sport Series update, released on June 19, 2018, during the GTA Online Bonuses (June 2018 Part 2) event.

RC Bandito Races are another type of Stunt Races added as part of the continuation of the Arena War update, released on January 29, 2019, during the RC Bandito Week event.

Target Assault Races are a new class of races added in Grand Theft Auto Online as part of the Southern San Andreas Super Sport Series update and released on April 3rd, 2018, during the Target Assault Week event. Teams of two players must race in a circuit where one of them must shoot at targets that will spawn through the race. 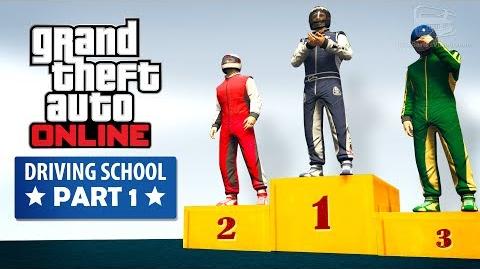 Retrieved from "https://gta.fandom.com/wiki/Races_in_GTA_Online?oldid=1250991"
Community content is available under CC-BY-SA unless otherwise noted.