Race And Chase is a trilogy of arcade racing games developed by AKEDO. The games are available for up to two players in the Arcade in Grand Theft Auto Online.

Each of the games have obstacles in the way, which may vary from other cars and vehicles, pedestrians and jaywalkers, and mythical creatures. The games are set on a time limit, and the player must clear the check points along the way to reset the timer, otherwise the timer will run out and will result in a game over.

Race And Chase: Street Legal is one of the games in the trilogy, in this game the player can drive a pink Turismo Classic and a yellow Torero. The game appears to be based on the popular racing game; Out Run.

Race And Chase: Get Truckin'

Race And Chase: Get Truckin' is another game in the trilogy, in this game the player can drive a red Bodhi and a blue Merryweather Mesa.

Race And Chase: Crotch Rockets is another game in the trilogy, in this game the player can drive a red and green Bati 801RR. The game appears to be based on the classic motorcycle game; Hang-On.

There are three challenges available across the three arcade games. Special T-shirts will be awarded to the player if they manage to complete each one of them. Completing all challenges will also award a trophy in the Arcade Trophy Case.

This challenge requires the player to complete a full game without crashing. To complete this challenge all 5 locations (Los Santos, San Fierro, Las Ventures, Vice City and Liberty City) must be raced through without crashing. This is best done on the Get Truckin' cabinet since it has the slowest and safest vehicle. Just keep practing until you get a better hang of the controls, changing very quickly between low and high gear can help a lot in avoiding obstacles.

Completing this challenge awards the player the Race and Chase Vehicles Tee.

Completing this challenge awards the player the Race and Chase Finish Tee.

This challenge requires the player to win 40 races against another player. This challenge is easier done with a friend, just score a few points and let the timer run out.

Completing this challenge awards the player the Race and Chase Decor Tee.

Completing all three challenges awards the player with three t-shirts (Crotch Rockets Tee, Street Legal Tee and Get Truckin') and a wheel shaped trophy in the Arcade Trophy Case. A copy of this trophy will also be available in the player's Penthouse to be used as decoration. 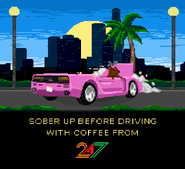 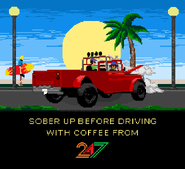 Race and Chase: Get Truckin', featuring a Bodhi. 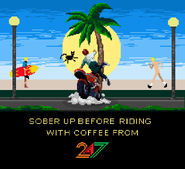 Retrieved from "https://gta.fandom.com/wiki/Race_and_Chase_(Game_Series)?oldid=1237794"
Community content is available under CC-BY-SA unless otherwise noted.