Standard White - 100%
“There's more power behind the Dinka RT3000 than the Palmer-Taylor Power Station when they break out the party dust, start the rave, and let the reactor do its thing. It's not a complicated formula, but it works.”

KDJ: "What kinda wheels we rollin’?"
Sessanta: "RT3000"
KDJ: "Oh hell, it better not be rainin’ out there, you know that shit is slippier than a motherfucker."
—Unused dialogue where KDJ and Sessanta discusses the RT3000

The Dinka RT3000 is a 2-door roadster featured in Grand Theft Auto Online as part of the Los Santos Tuners update.

The vehicle is based on the Honda S2000 roadster, judging by the overall design and the similar name.

The vehicle is distinguished by its basic design and sporty nature, where the front end features a central mesh grille spanning about half the car's width, as well as small circular fog lamps that work when the engine is on. The upper area is occupied by the license plate on the centre that partially covers the grille, black headlamp housings with dual circular units and inner fog lamps each, and small amber indicators on the outer edges of the car. The bonnet area is relatively simple and bears the manufacturer emblem on the front, while the sides have small elevations starting from the inner edges of the headlamps and end on either lower corners of the windscreen.

The sides of the car are denoted by the flat profile on the wheel arches, the upswept skirting area and the thin body lines passing through the entire car, as well as the manufacturer badging on the front fenders and the coloured horizontal hoor handles. The greenhouse area features black trim around and small mirror shells, as well as a black retractable roof with a similar mechanism to the Surano, where it slides to the rear area and keeps the front section leveled to later fold down and cover most of the portion behind the seats. The car also has a small boot compartment.

The rear of the car consist of a detail with a third brake lamp on the boot lid, along with the manufacturer logo below. Either side of the car are black tail lamp housings, each one consisting of dual circular units with outer red LED lamps and inner white lamps, as well as vertical amber indicators on the outer edges. The bumper has a basic appearance and features a dedicated section for the number plate, as well as two mouldings for the exhaust tubes.

The vehicle shares the same "Feroci" dial set as vehicles like the Coquette, the Serrano and the Habanero. However, like the Blista Kanjo, the steering wheel bears the manufacturer logo on the horn cap. In addition, it uses a white variation of the interior used on the aforementioned cars, able to be painted.

The primary colour of the car is applied on the bodywork and the overstitches of the steering wheel, while the secondary one is applied on the lower portions of both ends, the skirts and the detail on the boot lid. A trim colour is also available for the interior, as well as a dial colour that also affects the brake calipers. It uses a set of six-spoke rims with low-profile tyres.

The RT3000 has good top speed and acceleration, but is hindered by its extremely poor traction. It will wheelspin massively on hard launch, which negates its good acceleration capability initially, but once the vehicle is on the move, it catches up to the vehicles ahead pretty quickly. Due to its poor traction, it suffers from massive oversteers and unstable characteristic when turning round corners despite having precise and sharp steering feel. Braking seems to be the strong suit of the vehicle, as it halts the vehicle from high speeds in no time, even beating the best vehicle of its class, the Calico GTF.

Despite its poor traction and its characteristic to oversteer, it is one of the best vehicles to be used for drifting, as the precise steering allows the driver to point at which direction the car is moving quickly and the characteristics of the vehicle makes it easier to initiate a drift without any other inputs (i.e. handbrake), as all one will need to do is to turn left then right quickly enough for the rear end to swing out and catch it back with a countersteer, thus it would hold the drift extremely well.

Crash deformation is average like the other vehicles in the update, as it does not deform too badly upon impacts, but be cautioned that the RT3000 would tend to lose body parts rather easily but it does not impact how the car drives.

The RT3000 is powered by an inline-4 engine fitted with a pod filter on the inlet manifold, mated to a 6-speed gearbox in a front-engine, rear wheel drive configuration. Its engine sound is a higher-pitched variation of the one used on cars like the Monroe, the Bifta and the Kuruma. 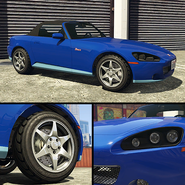 The RT3000 in the cinematic preview on Rockstar Games Social Club.

Could be won through completing the fourteenth Prize Ride Challenge, which required the player to place top 4 in eight Pursuit Series Races the week.