Standard White - 100%
“What's the Alkonost's biggest selling point? Speed? Agility? Terrifying aerodynamics? How about enough ordnance to sink a midsize island? Or the fact that once you hit a decent altitude you're invisible to radar? Scared yet? If not, we can only assume you're already in the cockpit.”
— Warstock Cache & Carry description.

The RO-86 Alkonost appears to be a fusion between the Russian Tupolev Tu-160 and the American Rockwell B-1 Lancer, sharing the large profile and features from the former, but featuring a tail shape similar to the latter, especially the area right above the horizontal stabilator.

The Alkonost features a large fuselage with a sharp nose, a large cockpit and an access door ladder on the left, in a similar manner to aircraft like the RM-10 Bombushka and the Volatol. The main section features large angular wings with black connectors, hinting an apparent variable-sweep wing mechanism (though it is always fixed in a low-speed configuration and there is no functionality on it either). Directly below the wings, there are dual intakes on the front and four black turbines on the back, which are identical in shape to the main turbine of the Hydra. The empennage/tail assembly is also long and features a large cruciform tail, together with a small protruding section on the roots of the horizontal stabilizers. Although not usable in normal gameplay, the Alkonost features a cargo ramp door with a fully-rendered bay similar to the Titan, visible during the Cayo Perico Heist finale (if chosen as the approach vehicle).

The interior of the aircraft is relatively small, using the same green interior, panel and dial set from the Bombushka and the Volatol. The middle section is mainly occupied by the thrust controls, while additional instruments are seen mounted on the upper area of the cabin.

Similar to the Chernobog and the Akula, the Alkonost is of Russian origin, evidenced by the red star emblems on the wings and the tail, along with "PO-86 Алконост" markings on the front of the fuselage and the vertical stabilizer. The primary colour of the vehicle is applied on the entirety of the body, while the secondary colour is applied on the door latch. It uses a set of plain industrial wheels also used on the Bombushka and the Volatol.

The vehicle can be equipped with bombs. 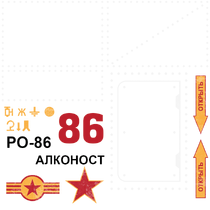 As expected from an aircraft of this size, the Alkonost is very difficult to take off or land, as it requires a vastly open area such as the runways of LSIA or Fort Zancudo. While slow compared to most aircraft, it is seemingly quicker than the RM-10 Bombushka and the Volatol. Care should be taken when turning too sharp on the ground, as the narrow positioning of the undercarriage would cause the aircraft to lean to a side and scratch one of its wings on the ground, increasing the risk of crashing into an obstacle if the plane is moving too fast. Similarly, the aircraft's handling is quite erratic; even on the ground, the aircraft will lift if the player leans forward while going forward or backwards, so it is recommended to not force the vehicle during the landing process.

The aircraft is powered by four turbofan engines with apparent usage of afterburners, similar to fighter jets like the P-996 LAZER and the Hydra. It shares the same sound with aircraft like the Shamal and the Volatol.

Defense-wise, the Alkonost has limited resistance like many aircraft, able to withstand two homing missiles from the Homing Launcher before being blown up with a third one. However, the Alkonost makes use of an automatic stealth mode; by flying from a considerable height, the aircraft will be invisible from enemy radars (about 1,600ft from the altimeter on the interior). This feature, however, could be rather ineffective, as the aircraft is very large and can be visually spotted easily, especially during daytime.

The Alkonost showcased in the update’s official artwork.

Skydiving from an RO-86 Alkonost during the Cayo Perico heist finale. Note the open cargo ramp. 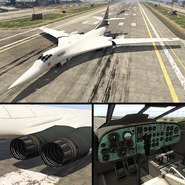