Standard White - 100%
“When it comes to dropping enough ordnance to give the peaceniks something to blubber about, there really is no need to change a winning formula. The Bombushka comes straight out of a time when the good guys were the good guys, the bad guys were the bad guys, "collateral damage" was just "damage", and wars could be won from the air. Saddle up, comrade.
Please note: This aircraft is excluded from Pegasus Lifestyle Management and must be stored in a personal hangar.
”
— Warstock Cache & Carry description.

The RM-10 Bombushka is a large cargo/gunship plane featured in Grand Theft Auto Online as part of the Smuggler's Run update.

The Bombushka was initially available as a mission-only vehicle. However, as of the RM-10 Bombushka Week commencing September 19th, it became available for purchase for all players.

“There’s no such thing as having too much firepower at your disposal, and here to help you obliterate your adversaries is the mother of all aerial assault vehicles - the RM-10 Bombushka. With seating for six and enough ordnance to flatten a small village, this behemoth is sure to summon a few white flags from your enemies. If front, top, and rear-mounted guns aren’t enough, upgrade your Bombushka in your Hangar Workshop to drop a few additional surprises on your foes like Explosive, Gas, Incendiary and Cluster bombs. Grab your RM-10 Bombushka today from Warstock Cache & Carry.”
— Rockstar Newswire description.

The RM-10 Bombushka appears to be based on the Antonov An-12, with the cabin layout inspired by the Consolidated B-24 Liberator. The weapon configuration appears to be loosely similar to that of the North American B-25 Mitchell, while the roof and tail turrets themselves seem to be based on those on the Boeing B-29 Superfortress or the Tupolev Tu-4 "Bull". The technology on its interior appears to be of the Cold War era, most likely from the 1950's.

The Bombushka features a large fuselage with a rounded nose, a large cockpit and an access ladder door on the left similar to the Titan, along with the corresponding hatches for the nose undercarriage. The main section consist of the large wings with the corresponding ailerons and airbrakes, as well as the four engines mounted below the same, which have markings that read "предупреждение" ("warning" in Russian), while the lower section has two extensions that house the main undercarriages and hatches for the bomb bay. Towards the rear section, the aircraft features dual cargo ramp doors that players can interact with when owned as a personal aircraft, while the tail assembly features a large vertical stabilizer with the corresponding horizontal ones.

The interior of the aircraft has a greenish appearance and consist of the cabin, the control room and the cargo bay. The cabin features the corresponding flight instrument with its dedicated dial set, which are similar to aircraft like the Tula and the Mogul (albeit with Russian markings similar to the V-65 Molotok), as well as the main seats for the pilot and the front turret gunner. Although not accessible, the cabin also has a walkway in the center that leads to a smaller cabin with additional instruments on the front, likely serving as an observation/navigation cabin. Behind the cabin area there is a control room, which features two computer stations for the top and rear turret gunners, as well as a small bench for two additional passengers. This section has Cherenkov Vodka and Jack Howitzer posters, a small rack with Assault Rifles and a reel-to-reel recorder that move when the aircraft's engines are on, as well as a green display screen identical to those from aircraft like the Titan and the Cargobob. The cargo bay is relatively small and is separated from the rest of the interior.

The primary colour of the vehicle is applied on most of the aircraft's body, while the secondary colour is applied on the lower portions of the fuselage, the engines and the frontal turret. It uses a set of plain industrial wheels also used on the Titan, with the same layout as the former (a single nose gear wheel and twin main gear wheels per side).

The vehicle is armed with three remote turrets, which appear to use the same gun model from the Technical and its variants (therefore being DShK machine guns. The front and rear turrets can be also modified with autocannons similar to the one from the FH-1 Hunter's chin-mounted gun (therefore being Hughes M230 30mm chain guns), while the aircraft can be equipped with bombs. 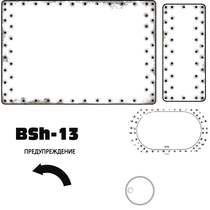 The Bombushka is extremely slow due to its size and weight, which, combined with its low mobility and slow take-off speed, can make it an easy target for enemies. However, it is very stable and the weapon options makes it a great contender in a fight. The aircraft has limited pitch angle and cannot increase or decrease altitude quickly, and as ecpected from a plane of this size, it cannot perform stunts without losing altitude quickly. Losing one or two propellers without major damage to the engines is not enough to bring the aircraft down, although its handling may become extremely sluggish.

Like the Titan, the Bombushka is powered by four turboprop engines, which emit the same distinctive cranking sound when starting the plane, as well as the heat effect produced in the exhausts of each engine, similar to jet-powered aircraft like the Shamal and the Luxor.

The aircraft can be equipped with eight JATO thrusters, which are intended for a near-instant take-off and quick acceleration. JATO thrusters propel the aircraft for 7.5 seconds and are recharged upon landing.

The armor of the Bombushka is poor, as it can be easily destroyed with a single explosive, although it can resist a homing rocket without exploding. Like the Titan, the Bombushka can withstand a hit against an obstacle without exploding, but its slow movement will likely cause it to plummet to the ground and consequently explode. 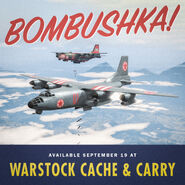 The RM-10 Bombushka on the promotional image of Bombushka Run.

The Bombushka logo used in an advert.

Graphic details of the control room. 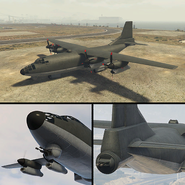 The RM-10 Bombushka on Warstock Cache and Carry.

The RM-10 Bombushka on the updated Rockstar Games Social Club.

The RM-10 Bombushka in a cinematic preview on the Rockstar Games Social Club. 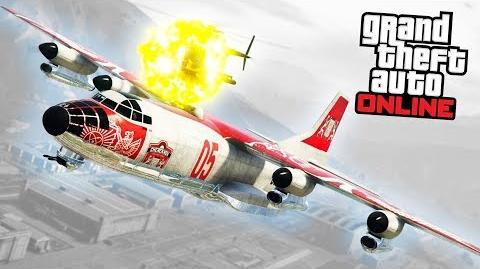