Standard White - 100%
“Fresh from baffling onlookers across the GT circuit, the experimental prototype from Annis is now on limited commercial sale. In a revolutionary design process, Japan's finest artisans, engineers, aeronautics experts, martial artists and chefs have come together to product a seamless extension of your delusions of edginess and accomplishment.”

The Annis RE-7B is a two-door endurance racing car featured in Grand Theft Auto Online as part of the Cunning Stunts update.

The RE-7B is heavily inspired by multiple endurance racing cars, primarily the Nissan R390 GT1 and Mazda 787B, as well as the Aquila CR1 and Memo Rojas BMW. The headlamps bear a striking resemblance to the headlamp designs on the 2014 Audi R18 e-tron Quattro.

The design of the car is very low-profile and aerodynamic, featuring a very sloped front end with dual intakes on the lower side, and numerous vents on the bonnet and next to the bulky front fenders. The outer areas of the car feature a dual set of square lamps, one stacked over another, giving the impression of vertical LED strips.

The sides of the car are mostly dominated by rear-facing ducts on the front fenders and dual vents on the rear fenders, followed by smaller slatted vents on the lower area and dual side-exit exhausts directly in front of the rear arches. The car has gullwing doors in a similar manner to the Osiris. The cabin area has a narrow, curved profile, featuring a curved windscreen with a single wiper, pillars and rear-quarter panels finished in black, and a fully-enclosed rear engine bay with two small black intakes and slatted upper vents over the rear fenders. A set of rounded mirror shells can be seen over the front fenders.

The rear of the car has the corresponding turn and reverse tail lamps on the fender area, while the centre has the chassis frames with a large racing spoiler attached to it. The entire underside of the vehicle is fully plated, with an integrated two-element diffuser and two outer panels for the rear-facing brake light strips.

The interior of the car makes use of several race-type components, being a carbon-fibre dashboard, steel flooring and carbon-fibre, lightweight seats. The RE-7B includes many switches and buttons across the interior, and features a knob reading F/R for adjusting brake bias more towards the front or rear accordingly. The steering wheel itself includes multiple buttons, and directly behind that are two paddles for an apparent paddle-shift gearbox. Two RPM indicators can be seen on the centre of the dashboard and below the digital display on the driver side. Also, a radio is seen located on the dashboard, almost on the centre.

The primary colour of the car is applied on the bodywork and the stitching on the steering wheel, while the secondary color is applied on the inner rear frames. Like the ETR1, the RE-7B features racing slicks with Atomic markings for the stock wheels, with the rims being star-shaped rims with a red centre and a bolted-on surrounding.

Being an endurance racing car, the vehicle performs well, as it has higher than average top speed, and acceleration is also impressive. However, it struggles to give the car faster take-off, partly due to the lack of traction and the weight. It is also affected by the high wheel-spin due to its immense power, which can result in a delay before the RE-7B can get going, therefore being problematic for races. Braking is also poor and requires more time to brake from speed. At higher speeds, the RE-7B corners incredibly fast compared to other supercars, but struggles at lower speed corners when the air passing over the car and the massive spoiler upgrade is not enough to keep the tyres planted and retain enough grip, causing some slight understeer. Furthermore, it has weak durability against harsh collisions as without armor upgrades, it can greatly hinder the RE-7B's performance. Overall, despite the setbacks, the RE-7B is consistently competitive on proper racing circuits, but not so much on streets with congested traffic.

The vehicle has a powerful engine, being relatively high-revving and high pitch for its style (somewhat similar to cars like the Cheetah), and the car tends to backfire through its side exhausts. A 6-speed gearbox provides transmission to the rear wheels.

An RE-7B shown in the promotional concept art.

The RE-7B with no liveries. 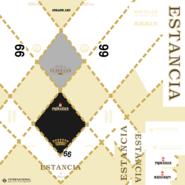 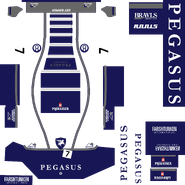 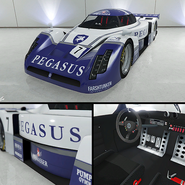 The Pegasus RE-7B on Legendary Motorsport. 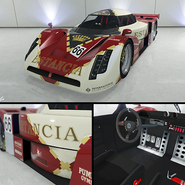 The Estancia RE-7B on Legendary Motorsport.

The RE-7B on the Rockstar Games Social Club.

The RE-7B on the updated Rockstar Games Social Club.

The RE-7B in a Cinematic preview on Rockstar Games Social Club.