The RC Raider is essentially a dark green miniature remote-controlled helicopter with a small main rotor and rounded cabin. Like its counterpart, the RC Goblin, the RC Raider seems to be an original concept from Rockstar Games, as the helicopter does not take any inspiration from a real-life helicopter.

The RC Raider also exists in Grand Theft Auto: Liberty City Stories, but it is never used in any of their missions and thus can only be obtained through a third-party hacking device or modification to spawn the helicopter. 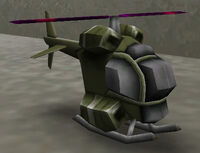 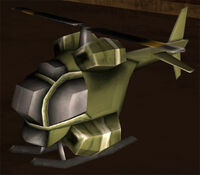 Retrieved from "https://gta.fandom.com/wiki/RC_Raider?oldid=993756"
Community content is available under CC-BY-SA unless otherwise noted.