20
“All the danger, none of the risk: this little devil is fully weaponized, and what's more, when you inevitably drive over the proximity mine you just laid the only thing that'll be reduced to ashes is your pride. If you want the indescribable pleasure of seeing your enemies flee in hysterical panic from a whiny toy car, this is the only game in town.

The RC Bandito was originally intended to be featured in Grand Theft Auto V, but was scrapped during development. [2]

There are various leftover files that reveals its existence, including a police scanner that denotes the vehicle by its name [3], as well as a handling model flag, RC[4]. This model flag causes any pedestrian model to become invisible after entering a vehicle with that flag enabled.[2] It also used an RC motor sound, which belongs to its specific model name, rcbandito. [5]

In addition, this vehicle used a custom third-person camera named FOLLOW_RC_C﻿AMERA. This camera is placed at a lower angle and longer distance than the standard vehicle camera.[2]

The RC Bandito would have presumably been used in a cut RC Challenge Random Event.[2]

The vehicle is depicted as a 1:6 scale off-road RC car chassis with an interchangeable lid. It features common elements from many off-road vehicles, such as large wheels with off-road tires, shock absorbers and sump guards. The vehicle features various color combinations, where the primary one is applied to the entirety of the lid and the secondary one on the bull bars. The miniature driver doll/s the vehicle has in the cabin are also paintable, with the helmets and the suits as colorable parts.

The vehicle is available with the following lids: 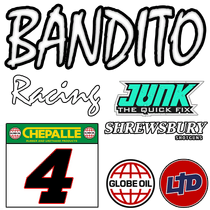 The RC Bandito has average performance as expected from an RC car. It handles pretty well on-road and off-road, but struggles to navigate around small obstacles such as curbs, road bumps and small debris in general, unless approached head-on. Like the drones from the Terrorbyte, the RC Bandito has a very quiet motor sound, making it harder to be detected by enemies, although its size makes it easily spotted visually.

Despite the small design, the RC Bandito can take up to three missiles to blow it up. However, prolonged use of the vehicle after being hit by two missiles will eventually kill the motor, destroying the vehicle. The vehicle also has a little bit of resistance to gunfire, taking many bullets to destroy it.

The vehicle can be installed with "Jump" mods. The Jump modifications come in three levels of effectiveness and can be activated using the horn button. When activated, the vehicle will be launched into the air, in a similar way to the Ruiner 2000 and Scramjet. This also allows it to navigate around obstacles better, and to evade enemies better when attempting to escape through tall structures (walls, boxes, small buildings, etc.)

The vehicle comes with the Jump Upgrade 20% installed by default.

Note that total capacity of Proximity Mines are limited to three, so players may require to respawn the vehicle if they want to resupply ammunition.

The RC Bandito can only be modified at the Arena Workshop, at the RC Bandito Workshop. This also serves as its saved location. 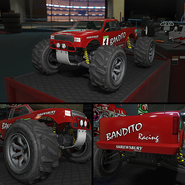 The RC Bandito Workshop inside the Arena Workshop. 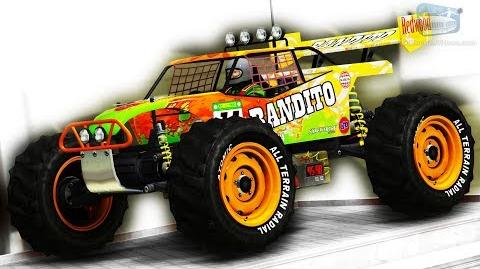