Police/Government Plate - 100%
“In our increasingly divided society, it can be daunting to stand out from the crowd. If you were confronted with a baying mob would you have the courage to stand up to them? How about if you were inside an armor-plated truck equipped with a water cannon and riot control plow? Stand tall, stand proud. The RCV is the quiet support your fearless conviction needs.
Please note: This vehicle must be stored in a personal facility and can be modified at the Facility Vehicle Workshop.
”
— Warstock Cache & Carry description.

The RCV is heavily based on the INKAS Armored Riot Control Vehicle, sharing the overall design and purpose, albeit with a wider body, flatter roof and vertically-mounted headlights.

The vehicle is depicted as a 10-wheeled riot-control truck with a relatively long body and robust appearance. On the front end, the lower area features a reinforced bumper with a large plow attached to it, while the upper area features a large grille with emergency lights on the upper corners. The sections beside the hood/nose are occupied by bulky fenders, housing front-facing headlights and top-mounted indicators, all of them protected by mesh screens. The hood has a relatively wide and angled profile and appears to have safety pins on the front, while the windshield has a large protective mesh screen in front of it.

On the sides, the cabin area is slightly narrower than the rest of the vehicle, having large doors with meshed screens over the windows and circular firing ports below, as well as large black mirror wings on the front doors and marker lights on the upper side. The lower area of the truck features side steps for access, wide wheel arches and a single exhaust pipe next to the left side step, while the rear section features grab handles for the additional passengers, upper frames and a set of three square emergency lights below the same frames, fitted with mesh screens. The roof area is slightly elevated and has various black sectioned panels and two additional square high-beam lights, along with what appears to be an inlet on the rear left corner of the roof, intended for the water tank.

The rear end is relatively flat, where the upper area features an additional frame, a rear-facing camera on the center, marker lights on the edges and what appears to be rear-facing lights, along with the corresponding emergency lights below. The lower area features a license plate on the center and a set of rectangular tail lights fitted with mesh screens, as well as a reinforced bumper below. The interior and dial set are similar to industrial trucks such as the Mule and the Phantom, but features a single bench rear seat and circular firing port hatches on the inner side of the doors, as well as long handles in place of conventional door handles.

It is largely implied in the game that the RCV is meant to be used by private security companies (being used by Gruppe Sechs personnel during the preparation "Riot Control Van"), even though it feature sirens and emergency lights. Riot-control vehicles in real-life are generally operated by the city's police department.

The truck is painted with a primary color on the body and a secondary color on the bulky fenders and lower portions of the vehicle, invluding the front plow. It uses industrial wheels derived from most industrial trucks such as the ones mentioned above.

The vehicle is equipped with a front water cannon, and can be also modified with a rear water cannon. While largely similar in design to the one from the Fire Truck, they have mounted cameras beside them.

The RCV performs similarly to most armored trucks in the game, although it is much quicker in acceleration and maneuverable, similar to the Brickade. The long body, however, limits its handling on narrow areas, and the front plow limits it capabilities to sort elevations and small obstacles with ease, although the rear end is very elevated and allows to pass such obstacles, although not as effective as vehicles with similar profiles, such as the front end of the APC.

Prior to the Arena War update, the plow was mostly effective on law enforcement vehicles, especially when hit from the side, as it will be either pushed very far (often giving the RCV a small boost), flipped over, or sent airborne with enough force. This did not worked on civilian vehicles as it will only decrease momentum upon impact. After the update, however, the plow is effective against most traffic vehicles.

The truck is powered by a front engine which cannot be determined due to the sealed hood, and by clipping the Rockstar Editor camera on it reveals it has no model altogether. It is coupled to a 5-speed gearbox in a front engine, rear wheel drive layout. The engine sound is shared with light trucks such as the Mule and the Stockade.

The RCV is resilient to bullets in general, but can be easily destroyed by a single explosive, although it can resist at least three explosive rounds from the Heavy Sniper Mk II (before being destroyed with a fourth one), making it a decent choice for transport and getaways. However, the player can easily be shot out of the vehicle if they are facing gunfire, as the windows are not bullet-proof despite the meshing on the windows (unlike the Police Riot).

Like the Fire Truck, the RCV features a water cannon that can be used by the driver (with an option to add a passenger-operated water cannon). The water from it can go through doors without opening them, spraying and pushing back those behind. However, their effectiveness are the same as the Fire Truck's, making the RCV a poor choice on combat situations.

Although the player still cannot make use of weapons while driving the vehicle, the action button that normally changes weapons gives the water cannon a unique tracking functionality; by holding it, the water cannon tracks nearby vehicles (occupied or not) within a small radius (more or less 15m) without having to move the camera. This seems to work on a 90 degree coverage, relative to the vehicle's front (meaning any vehicle past the 45 degrees from a side will be simply ignored). This also applies to the passenger water cannon.

The RCV can only be modified at the Weaponized Vehicle Workshop inside a facility.

* Denotes items that can only be unlocked for purchase via research in the Bunker property.
** Vehicle is limited to Tire Smokes. Bulletproof Tires installed as standard.

An RCV with lights and sirens activated. (Rear quarter view)

Comparison between the RCV and the Police Riot. (Rear quarter view) 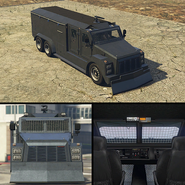 The RCV on Warstock Cache & Carry.

The RCV on the updated Rockstar Games Social Club.

The RCV in the cinematic preview on Rockstar Games Social Club. 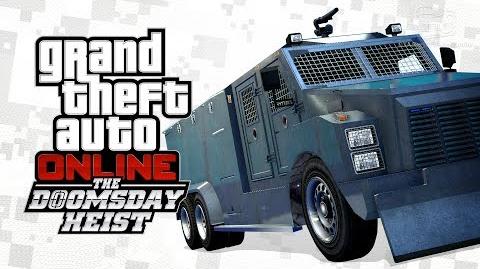