Standard White - 100%
“We could just keep saying 'ultra' and 'turbo' over and over but even these hardcore buzzwords can't do the Ocelot R88 justice. Instead, simply look at it. Look. Look again. Did you look? Then what are you waiting for?”
— Legendary Motorsport description.

The Ocelot R88 is an open wheel car featured in Grand Theft Auto Online as part of the continuation of The Diamond Casino Heist update, released on February 27, 2020, during the Open Wheel Races Week event.

The R88 seems to take inspiration from various race cars of the 1980s, but predominantly the Lotus 97T while featuring the distinctive nose design of the Lotus 88.

The R88 features a narrow, low-profile design, having the distinctive rounded nose with the small dual wings on front, an open driver compartment, large side intakes and the medium-sized rear wing with the single tail light. The entire underside of the vehicle is carbon plated. Also, similar to vehicles like the Drift Tampa or the Hotring Sabre, the R88 features the use of racing slicks for the wheels, along with its own custom "Race" wheels. The vehicle is painted with the primary colour, while the surfaces of the wings are painted in a secondary colour. Its engine reuses the same "Dinka Racing Division" badges found on the PR4, but using the corresponding manufacturer's name instead.

Its interior uses the traditional blue analogue dials based on the Sultan dials, along with buttons found around the panel and the steering wheel. There appears to be a digital display below the dials.

The R88 is largely similar to the PR4, having fair handling and excellent braking. At high speeds, the vehicle will get a slight understeer when attempting tight turns but this is mitigated through simple use of brakes. The downside of using this vehicle, however, is that the driver will be unable to use their weapons at all, risking the player getting attacked and not being able to return fire. It appears to have lower top speed and acceleration compared to the PR4, though remains relatively similar.

Unlike other vehicles, the R88 damage absorption will not result in deformation but instead the body kit falling off, exposing the engine and base frame. This can result in more understeer as the car loses more traction because of the missing parts, especially if the spoiler is gone.

Due to the immense downforce, the R88 can also drive on walls, even ones that are slightly curved outwards, and even ceilings if the player angles the car correctly, especially in the Los Santos Storm Drain, where there are inclines.

The R88 is powered by a V10 engine, with intakes that appear to be double-barrel carburetors/throttle bodies. Its sound is a lower-pitched variation of the engine sound from the Deveste Eight, albeit with a slight change.

In addition to its already impressive speed, the R88 also has KERS, allowing the driver to increase their speed even further by activating the boost, in a similar manner to the Lectro and the Vindicator. The boost lasts for four seconds and it takes about six seconds to recharge to its full capacity, but it does not have to be full to activate it. In order for the boost to recharge, the vehicle needs to begin slowing down to let it charge. Stopping the vehicle, accelerating, or reversing will prevent the boost from recharging.

* There are 10 liveries available to be applied, most of which reflect those that were used by various Formula One teams from the mid-1980s to early 1990s.
** Vehicle is limited to Wheel Color, Bulletproof Tires and Tire Smoke. Custom Wheels are restricted to the options listed above. 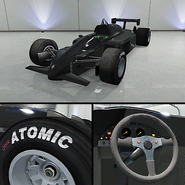 The R88 on Legendary Motorsport.

The R88 in the cinematic preview on Rockstar Games Social Club.

The R88 badge used for the advert. 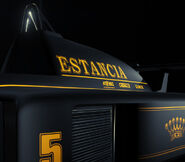 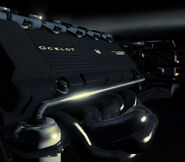 Used on the advert for Open Wheel Races. 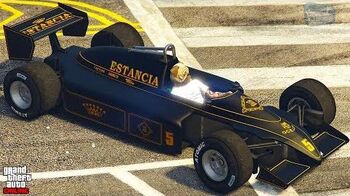