View source
watch 02:46
The Quarry - The Loop
Do you like this video?
Play Sound
For other uses, see Quarry.

21:00
“So a little casual internet research on my part has revealed some interesting intel. A crew is planning to hijack some explosives from the Davis Quartz quarry for a bank job, which game me a great idea. Why don't we do the same thing, and maybe even take out the crew in the process? They'll probably have snipers so keep your eyes open. Deliver the explosives to the warehouse - I'll store them there for a rainy day.”
— Description

Quarry Quarry is a mission in Grand Theft Auto Online given to the player by Lester Crest. It is available from 1 to 4 players.

The team has to obtain two vans containing explosives. Both vans can be found in the Davis Quartz quarry and will be protected by several well armed men, including snipers. When one of the two vans has been stolen, four enemy cars will come in to kill the team. Both vans must be brought to Lester's warehouse. 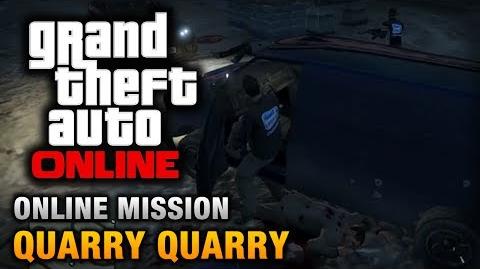