The Quad in Grand Theft Auto: San Andreas assumes a sporty design more suited for recreational use. As a result, it has a lightweight chassis based on the Yamaha Breeze and has a two-tone paintjob, where the secondary color separating the primary one in a form of a wide stripe on the middle and both a single headlamp on the front and a single tailight on the rear.

The Grand Theft Auto: Vice City Stories rendition of the Quad sports a more utilitarian design, based on the Can-Am Outlander. This version features additional equipment, such as racks and additional lights.

Like the San Andreas rendition, the Quad is available in a two-tone paintjob, except that the primary is much wider and occupies the entire chassis, while the secondary color can be seen only on the vehicle's fenders.

Due to its design, the Quad is one of the best vehicles for off-road driving in Grand Theft Auto: San Andreas, with performance traits similar to the Sanchez, particularly speed-related attributes. It is also one of the best vehicles to use when driving up Mount Chiliad. Its suspension, however is a little wonky and coming off a jump may cause the quad to bounce side to side, causing it to tip over.

Due to its size and functionality, the Quad is often referred to as a bike. However, simply due to it having four wheels (not two) then it cannot be considered as such. It however, does have motorcycle-like physics, so the player can fall off if hitting an object at high speed or going down a hill backwards. Stoppies and wheelies can even be done on the quad, just like a motorbike. However, reverse wheelies can be performed (when on a hill), causing the Quad to tumble down backwards. Strangely, this does not cause the player to be tossed away. Just like with any bike, the player can shoot forwards as well as to the left and to the right.

In Grand Theft Auto: Vice City Stories, the performance of the Quad is considerably downgraded, with very poor handling on wet surfaces and grass (most noticeable during the Quad Time Trials side mission). However, contrary to the San Andreas rendition, the Quad is more stable on uneven terrains and it is slighty heavier than most motorcycles. Due to the performance and the exposed rider, the Quad may not be a good choice for evading wanted levels. 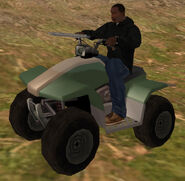 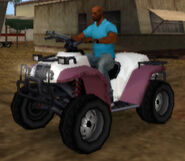 Artwork of the Quadbike in GTA Vice City Stories.

It can be found in a few places in the San Andreas countryside and in Little Havana in Vice City.