Standard White - 100%
“You want to rain death from the skies just like any other bearded twenty-something, but gun-metal grey and swept back wings are so mainstream. You need something that suggests old world expertise and class - like a manual transmission, or that cut-throat razor you're too frightened to use. Well look no further: with its twin-boom, single-engine vintage styling, the Pyro is the high-fidelity vinyl of air superiority.
Please note: This aircraft is excluded from Pegasus Lifestyle Management and must be stored in a personal hangar.
”
— Warstock Cache & Carry description.

The Buckingham Pyro is a military twin-boom fighter jet featured in Grand Theft Auto Online as part of the Smuggler's Run update, released on October 3rd, 2017, during the Pyro Week event.

The Pyro is primarily based on the De Havilland Vampire, albeit featuring elements from multiple variants of the same. The wings appear to be similar to that of the F.3 version, while the stabilizer setup are similar to that of the Mk I version. The tandem seat and cockpit appears to be inspired by that of the Mk 11/DH 115 version and BAC Strikemaster, but without the rear quarter windows located behind the main canopy. The protruding tail booms on the wings may have been inspired by the De Havilland Sea Vixen or Venom.

The Pyro is depicted with a relatively compact fuselage, featuring a wide and rounded nose with dual hatches for the nose landing gear, followed by a black cockpit with a canopy that opens backwards. Around the middle section, the aircraft features triangular intakes beside the fuselage and large wings with the corresponding air brakes and ailerons, along with the corresponding hatches for the main landing gear. Towards the rear section, the fuselage is narrower and houses a single jet turbine, while the tail booms are mounted on either wing and have small vertical stabilizers and rudders on the end, along with a wide horizontal stabilizer and elevator mounted between the vertical stabilizers.

The interior of the aircraft features a wide instrument panel with the "Flyer" dial set from basic aircraft such as the Maverick and the Buzzard Attack Chopper. The arrangement for the left half is similar to the left half of the Atomic Blimp and the Xero Blimp, but the switches on the right side are omitted and instead, the same arrangement is copied for the other half, although the marked switches are seen on the opposite side. It also adds blue markers above and the corresponding green "Gear Up/Down" displays on the left side.

The primary colour of the aircraft is applied on the overall body, while the secondary colour is applied in the form of stripes on the sections of the wings and the tail boom. It also uses a set of wheels similar to the ones used on industrial trucks such as the Mule, the Benson and the Phantom.

The vehicle is armed with a set of machine guns housed within the protruding sections of the tail booms, and can be also modified with missile racks on the wings. 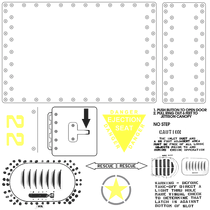 The Pyro is an extremely maneuverable aircraft, having one of the tightest turning circles and best acceleration of conventional aircraft. With full performance upgrades, the Pyro can be one of the best aircraft in a dogfight. The aircraft handles similar to the Rogue, both aircraft sharing extremely sensitive rudder controls. While flying above 900 feet, the aircraft can reach speeds of approximately 210 knots. This is approximately the same max airspeed of the Hydra. The Pyro's acceleration even surpasses the P-996 LAZER but unsurprisingly cannot compete with the jet boost of the LF-22 Starling. The undercarriage distribution also ensures greater stability on most landing zones, and it does not tip over as easily as the P-996 LAZER when performing sharp turns while taxiing.

The Pyro is powered by a single turbojet engine with an apparent use of afterburner/reheat, similar to the P-996 LAZER and the Hydra. It also shares the engine sound with the aforementioned jets, as well as the Besra.

Just like every other Smuggler's Run aircraft, the Pyro has the option to upgrade its armor. The armor of the Pyro is the same as every other aircraft and can withstand two direct hits from the Homing Launcher, while being destroyed with a third. However, just like every other airplane, if any of the Pyro's control surfaces are caught in the blast radius of any explosive weapon, they will be destroyed and fall off. This can cause the aircraft to become uncontrollable or severely limit the pilot's maneuverability. The Pyro also will be destroyed in eighteen rounds from the Heavy Sniper, and can only take three hits from the Heavy Sniper Mk II equipped with explosive rounds. 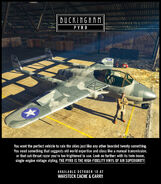 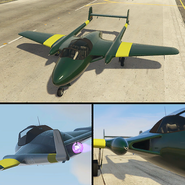 The Pyro on Warstock Cache & Carry.

The Pyro logo, used on the advert.

The Pyro on the updated Rockstar Games Social Club.

The Pyro in a cinematic preview on the updated Rockstar Games Social Club. 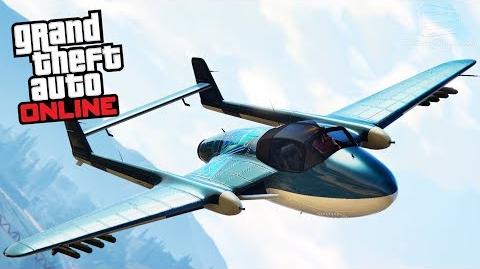