The dealers ambushing the scene.

Home's on the Range

Vic: "Gonzalez! We got...hit. The drugs...They're gone..."
Gonzalez: "What?! Are you fucking with me?! What's wrong with you?! Are you high on my shit?!"
Vic: "No...Yeah...Yeah...I must have been breathing it in...While I was out cold..."
Gonzalez: "I want my drugs back, Vic! I still have a buyer who might be interested, but he's leaving town real soon. Kill the bastards who did this and get my coke back!"
— Victor Vance calls Gonzalez and tells him about the ambushed deal

Purple Haze is a mission in Grand Theft Auto: Vice City Stories. It is the last mission given to protagonist Victor Vance by drug dealer Gonzalez, and is triggered from Ducum Inn Hotel in Vice Point, Vice City.

Victor meets Gonzalez at his hotel room in Vice Point. Gonzalez informs Vic of a van containing drugs which is parked in a lockup in Ocean Beach, and he wants Vic to take the van to a drug deal which is taking place in an alley in Washington Beach. Vic arrives at the lockup and takes the van to the location where the drug deal is taking place. Whilst he is waiting, a Linerunner drives at full speed into the front of the van, knocking Vic unconscious. Two men alight from the Linerunner, throw Vic out of the van and drive off with it.

Vic eventually regains consciousness, but has inhaled some of the drugs and is very disorientated. A few moments later, he receives a pager message from a concerned Gonzalez who asks why Vic is taking so long. Vic phones Gonzalez from a nearby payphone and informs him of the ambush. A furious Gonzalez orders Vic to retrieve the rest of the drugs and return them to the lockup, as he still has an interested buyer who will be leaving Vice City soon. After searching the area, Vic locates the drugs at a mansion on Starfish Island. He kills the dealers and returns the van to the lockup. When he arrives back at the lockup, Gonzalez thanks Vic for returning the drugs, but informs him that their partnership is over.

The reward for completing this mission is $1,000 and the mission Kill Phil: Part 2 is unlocked. 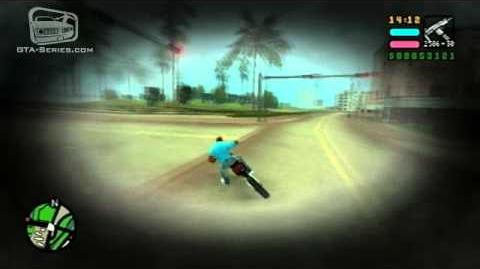