Towing a car to help JB.

In-game time
“What the fuck do I know about towing cars?”
— Franklin to Tonya

Pulling Favors is a Strangers and Freaks side mission in Grand Theft Auto V given to protagonist Franklin Clinton by Tonya Wiggins. Completing this side-mission contributes toward 100% Completion.

Tonya and her boyfriend, JB Bradshaw, are old friends of Franklin's. The couple run a towing service, but it is on the verge of being taken away from them. When Franklin asks about JB, Tonya is honest about the fact that he's off smoking crack. She pleads with Franklin to help them out by filling in for JB.

Franklin balks initially, but Tonya tries to guilt him into it by chiding him for not helping his cousin. After Franklin explains that they are not cousins, he reluctantly agrees to help. They both then head to the Davis Sheriff Impound to get JB's tow truck.

Franklin and Tonya get in the tow truck, then a dispatcher, Rodney, tells Tonya to tow an abandoned vehicle on San Andreas Avenue, Tonya responds that she and Franklin are filling in for JB. The dispatcher tells more about the abandoned vehicle, says it's been staying there for days, then he leaves the radio.

At Legion Square, Tonya says she watched JB towing multiple times, and she instructs Franklin to get the back of the truck close, making sure the crane is down, after which it should "slide through".

Franklin hooks up the abandoned car and Tonya tells him to get the car back into the lot. Once they arrive, Tonya tells Franklin to drop off the vehicle at the exact mark, as they can get picky about positioning.

Tonya says goodbye to Franklin, and tells him to call her if he needs something. Tonya then calls his boyfriend, JB, to inform him that Franklin did the towing job for him. JB asks Tonya what job she is talking about, to which Tonya responds calling him a "cracked-out fool", also mentioning his laziness. Tonya says goodbye to JB and tells him to "save [her] a taste", later hanging up the phone and beginning to smoke.

Approach Tonya, who will begin pleading for Franklin to help her and JB out by towing some cars for JB while he is off smoking crack.

Go to the tow truck.

Drive Tonya to the impound lot on the corner of Innocence and Roy Lowenstein Boulevards next to the Davis Sheriff's Station.

This objective appears when the player gets in a vehicle until Tonya gets in.

This objective appears once more when the player gets in JB's tow truck until Tonya gets in the truck.

Go to the abandoned car.

Drive the truck through an exit gate and a blue dot will appear on the map signifying the location of the abandoned car you must tow. The car is parked on San Andreas Avenue just in front of Legion Square.

Drive to the car and position the tow truck in front of the vehicle, backing into it. Lower the tow hitch by pulling down the

on PlayStation, or holding down

on PC, and when it is close enough to the vehicle, it will auto-attach. Then push up on the

on PC to raise the hitched car.

Tow the car to the impound.

Drive carefully back to the impound lot (a yellow dot and path will appear to assist you). If you drive too erratically or collide with too many obstacles, the car will become unhitched and you will have to hook it back up again.

Release the vehicle in the drop off zone.

Once back at the impound lot, drive into the gate and pull the car all the way into the red striped no parking zone. Once the car is in the zone, pull down on the

to lower the vehicle, and then hold right on the

to unhitch the car, which ends the mission.

This section depicts all cutscenes and dialogues in the mission "Pulling Favors" in Grand Theft Auto V.

to toggle focus on the target.
Use

to lower and raise the crane.
If a vehicle is attached, the crane can only be raised and lowered when the tow truck is stationary.
Hold

to drop off the vehicle.

Tonya asks Franklin to help JB with his job.

Go to the tow truck.

Arriving at the abandoned car.

Hooking up the car.

Tow the car to the impound.

Arriving at the lot.

Release the vehicle in the drop off zone. 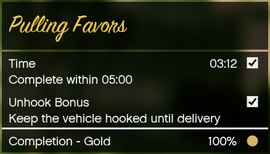