A Proximity Mine on the Rockstar Games Social Club website.

No
For the vehicle variation seen in the Gunrunning update, see Vehicle Mines.
“Some people hate surprises. And if those people happen to piss you off, this is the perfect motion-sensored gift.”
— Career Builder description.
“Leave a present to your friends with these motion sensor landmines. Short delay after activation.”
— Ammu-Nation and Social Club description.

“Once armed, the mine will detect any nearby movement and explode. Safety notice: once set, never go back to check it.”
— Grand Theft Auto: Chinatown Wars Ammu-Nation description.

The Proximity Mine resembles more of a Land Mine, due to the rounded shape, but much smaller. It acts much like the 3D Universe's Remote Grenade and Satchel Charges, but in an instant action rather than being activated by the player.

When placed, they will not explode unless a person/vehicle approach it, similar to the cut Land Mines in earlier Grand Theft Auto games.

The Proximity Mine resembles a much traditional rectangle-shaped explosive, similar to the Sticky Bombs and marked as "01/B".

When placed, any pedestrian or vehicle will activate the mine. Unlike the Sticky Bomb, the Proximity Mine seems to be almost "invisible" due to the lack of a light that will indicate its place.

When placed onto a vehicle driven by an NPC or another player (including its own), it will take 1-2 seconds to activate and explode. However, if the same is placed onto an inactive vehicle, it will not explode, being perfect to catch an unaware enemy that will take that vehicle. It will also explode if placed on the ground and walked over by any NPC or player, including the player who placed the mine. When a mine is about to explode, it will start to beep, warning players of the imminent explosion, although it is almost impossible to run away from the mine and avoid the explosion.

The only flaw is that the player can only carry five mines at once, which means that one will use these explosives wisely. Despite this, it is very useful for GTA Races in GTA Online, where the lead player would carefully place a Mine on a road layout for unsuspecting players to inadvertently drive over them and explode in the process which can give the lead player's advantage and widen the gap. 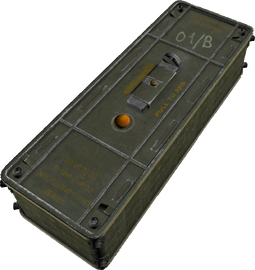 Holding a proximity mine.

Aiming with a proximity mine.