A protagonist is a main character of a story, and the main playable character in the Grand Theft Auto games.

Traditionally, a protagonist is the main figure of a piece of literature or drama and has the main part or role. Alternatively, the phrase denotes a primary advocate or proponent for a cause or movement. The main character can be a hero or a villain in a story - it is just the character with the lead role. In literature, the protagonist is characterized by his/her ability to change or evolve.

The protagonists between Grand Theft Auto III and Grand Theft Auto IV share similar qualities. Most protagonists either have never been to the city before (such as Claude, Tommy Vercetti, Victor Vance and Niko Bellic) or are returning after a long time (such as Carl Johnson, Toni Cipriani and Huang Lee). The protagonists usually start with nothing, with minimal influence and reputation, having to do odd jobs around for various small-timers, gaining friends and allies (like Maria Latore, Asuka Kasen, Avery Carrington, Wu Zi Mu, and Little Jacob) before moving up the social and economical ladder, attempting to rise through the criminal underworld, although their motives for doing so vary in each game. They eventually start establishing a name for themselves in the town, doing larger jobs, making bigger and more powerful friends and business partners, and cutting real deals as their prominence, respect, money, and reputation begins to grow, until they end the game on top of the city, or at least with some powerful business and/or friends. An abnormal protagonist would be Luis Fernando Lopez or Johnny Klebitz, as both have always lived in Liberty City and have already established a name, powerful friends, and are already high up on the social and economical ladder at the start of the game. Protagonists (up to Grand Theft Auto V) have a consistent distaste of drugs, and while dealing and working with them, never intentionally use them. However, the three protagonists in GTA V can use drugs in their safehouses: Franklin and Michael smoke marijuana, wheras Trevor smokes methamphetamine. In addition, transitional cutscenes may also show Trevor smoking meth on his own, or Franklin purchasing weed from a dispensary and his experience with the drug plays a role in his part of the Grass Roots mission strand. The GTA Online Protagonist can also be made to smoke from a bong in some safehouse locations.

Protagonist: Claude
Group: None
Group reason: Claude works for several gangs over the course of the game, including the Colombian Cartel (only briefly, prior to the events of the game), the Leone Crime Family, the Diablos, the Yakuza, the Yardies, and the Southside Hoods, but does not commit himself to a particular one, as most of them eventually betray and attempt to kill him. After all story and phone missions are completed, the only gangs that are not hostile towards him are the Yakuza and the Southside Hoods. One interpretation is that Claude is egoistical and cares only about money, power, vengeance, and strategic objectives, instead of allegiance.

Protagonist: Tommy Vercetti
Group: Vercetti Gang
Group reason: Tommy founded the Vercetti gang after taking over Ricardo Diaz's empire in Vice City. Tommy's gang is not named in the game, with the name "Vercetti Gang" spawning from Tommy's purchase of the Kaufman Cabs taxi company and dispatcher Doris informing the drivers that the company is now owned by the "Vercetti Gang". Tommy also used to be a member of the Forelli Crime Family, until betraying them due to having formed his own crime empire, and maintains good relations with Umberto Robina's Cuban street gang and Mitch Baker's biker gang.

Protagonist: Mike
Group: None
Group reason: Mike maintains close friendships with some gangs, yet has never made a commitment to one. He initially works for the Mafia (most likely the Leone Crime Family, although it is never specifically identified as so), and later allies himself with Cisco, the leader of the Colombian Cartel, and Asuka Kasen, co-leader of the Yakuza, although he was never interested in joining either gang, only working for them so that they would help him with his personal problems. Mike also briefly works for Yardies leader King Courtney, until he betrays him.

Protagonist: Toni Cipriani
Group: Leone Family
Group reason: Toni's parents (or at least his mother) were connected in the Leone Crime Family, but how and when Toni joined the family is never revealed. He is close friends with Don Salvatore Leone and is made Caporegime later in the game, retaining this position in GTA III. Through the game, Toni also briefly works for other gangs, but only under the direct orders of Salvatore, as he helps the Yardies gain control of the Newport district from the Sindacco Crime Family, and later the Southside Hoods take over Wichita Gardens from the Forelli Crime Family. Toni also performs several jobs for Yakuza member Toshiko Kasen, although most of them involve directly attacking the Yakuza.

Protagonist: Victor Vance
Group: Vance Crime Family
Group reason: After the death of Marty Jay Williams, Vic and his brother Lance, who would become Vance Crime Family Underboss, took over the remains of his old street gang, the Trailer Park Mafia, and started their own one to make money for their asthmatic brother Pete and rise up in the criminal enterprise. Through the game, Victor works for both the Mendez Cartel and Ricardo Diaz' gang in order to increase his influence, until the the former betray him and he cuts all his ties with the latter. Victor also maintains good relations with Umberto Robina's Cuban street gang.

Victor is the first protagonist in the series to have died, as he was murdered by a group of hitmen sent by Ricardo Diaz, during a drug deal with Tommy Vercetti in the begining of Grand Theft Auto: Vice City.

Protagonist: Niko Bellic
Group: None
Group reason: Niko works freelance, and even though he befriends several gang leaders, he does not commit himself to any particular one. The Yardies and the McReary Mob have and will always be allied with Niko due to his friendships with Little Jacob and Patrick McReary. Niko also has a sort of connection with and receives protection from the Gambetti Family after he forms a bond with their leader, Jon Gravelli, shortly before his death. He can also have connections with the North Holland Hustlers, if the player chooses to kill Playboy X instead of Dwayne Forge.

Johnny is the second protagonist in the series to have died, as he was later murdered by Trevor Phillips, one of three protagonists in Grand Theft Auto V, for confronting him after Trevor had sex with his girlfriend Ashley Butler.

Protagonist: Luis Fernando Lopez
Group: Northwood Dominican Drug Dealers
Group reason: Luis works for Tony Prince, who is not affiliated to any specific organization. He used to be a member of the Northwood Dominican Drug Dealers prior to meeting Tony and, even though he no longer directly works for the gang, he maintans friendships with members Armando Torres and Henrique Bardas, whom he helps from time to time with several drug deals. Also, depending on the player's actions, Luis can build up a drug empire alongside Armando and Henrique.

Protagonist: Huang Lee
Group: Liberty City Triads
Group reason: Huang's father was the head of a sub-sect of the Triads before he was killed for the Yu Jian Sword, which led Huang to travel to Liberty City. He remains a loyal members of the Triads throughout the entire game, and is never seen performing jobs for any other gang, although he can still meet several drug dealers from these gangs and engage in small-time drug deals with them. At the end of the game, after the death of his uncle Wu "Kenny" Lee and the imprisonment of Triads' leader Hsin Jaoming, Huang is named the new leader of the Liberty City Triads.

Protagonist: Michael De Santa
Group: None
Group reason: Although he is a friend of Franklin Clinton, who is a member of The Families gang, and Trevor Philips, who operates his own organization, Trevor Philips Enterprises, Michael is not part of any specific group during the events of GTA V, though he and Trevor previously in a bank robbery ring, the fate of which drives Michael's part of the storyline.

Protagonist: Franklin Clinton
Group: Forum Gangsters/Chamberlain Gangster Families
Group reason: Franklin was born and originally lived in South Los Santos, an area controlled by the Chamberlain Gangster Families, which he joined in his youth. His best friend Lamar Davis is also a member of the Families. They eventually start their own Families set which is known as the Forum Gangsters. Franklin is also friends with Trevor Philips, the head of Trevor Philips Enterprises.

Protagonist: Trevor Philips
Group: Trevor Philips Enterprises
Group reason: Trevor lives in a trailer at Sandy Shores, from where he runs his own organization, Trevor Philips Enterprises. He mostly deals weapons and drugs to other gangs from all throughout Blaine County, but later also establishes a headquarters in Los Santos after taking over the Vanilla Unicorn strip club. He operates with Ron Jakowski, Wade Hebert, and briefly Floyd Hebert, as well as Oscar Guzman if the McKenzie Field is purchased. Like Michael, Trevor forms a friendship with Families member Franklin Clinton.

Protagonist: GTA Online protagonist
Group: Motorcycle Clubs, Organizations, and Crews (Player's Choice)
Group reason: New to the city, the player is attached to no specific group and does jobs for various types of people and groups, although the player can create their own crews, motorcycle clubs and organizations or simply join somebody else's. 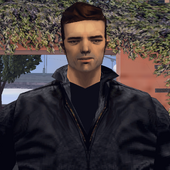 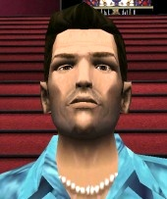 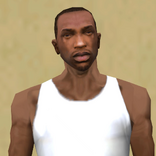 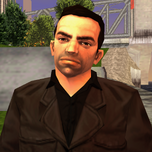 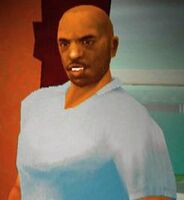 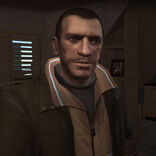 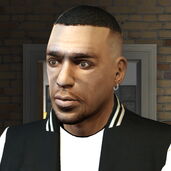 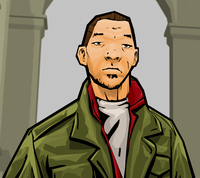 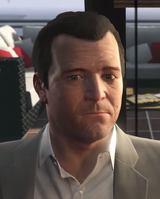 Michael De Santa, one of the protagonists of Grand Theft Auto V. 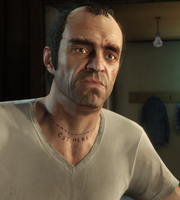 Trevor Philips, one of the protagonists of Grand Theft Auto V.

Franklin Clinton, one of the protagonists of Grand Theft Auto V. 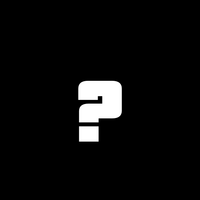 The GTA Online Protagonist's traits are player-chosen.
Add a photo to this gallery

Retrieved from "https://gta.fandom.com/wiki/Protagonist?oldid=1297766"
Community content is available under CC-BY-SA unless otherwise noted.