GTA Wiki
Register
Don't have an account?
Sign In
Advertisement
in: Pedestrians, Features, Features in GTA III,
and 8 more
English

View source
watch 02:40
World of Warcraft: Dragonflight - The Loop
Do you like this video?
Play Sound
For the side mission in Grand Theft Auto: Vice City Stories, see Prostitution.

They are mainly out on the streets at night, and to receive their services, the player must drive close to them and stop. Prostitutes can raise the player's health to more than 100% in the 3D Universe. Players must pay for their services. However, as the money is added to the prostitute and the money is dropped upon her death, it is technically possible for the player to kill the hooker and take the money back when finished - probably the in-game situation most commonly criticized as part of GTA's traditional violence/immorality.

Picking up prostitutes has been much the same for Grand Theft Auto III, Vice City, Liberty City Stories and Vice City Stories; simply by pulling up to one. You can avail them, given that you have more than $100, or else they will refuse to get into the car (entering the cheat code to make pedestrians enter your car will only make them stand). Honking isn't necessary in order to get a prostitute in the car. Players can only have "sex" with them on any ground that can kick up dirt or sand, and even surfaces like the tiles of swimming pools, as the game doesn't consider seclusion as a factor. Having "sex" with a hooker is just an effect of the car bouncing up and down on an accelerating speed starting at an interval of 1200 milliseconds, then decreasing down to 350 milliseconds by 30 milliseconds each time the vehicle is shaken (specifically, the car lowers down on where the hooker is sitting). Sex has a healing effect; it can restore up to 30 health points, but even beyond the normal maximum HP by 25. However, a hooker can increase the player's health to this level instantly with no limit on the amount of health increase, if a player uses a topless vehicle (including convertibles with the top retracted). While the hooker is in the car, the player's money decrements every second until it goes at $10, where the car stops shaking and the hooker gets out of the car. If the player is wasted or busted, the shaking will stop, and the hooker will just get out of the car normally. Sometimes, the shaking won't stop if a car has overturned. If the car stops shaking and the hooker cannot get out of the car, when the player starts to drive, the hooker will scream like a scared female pedestrian. It is possible to lengthen the service by driving a short distance while the car is shaking, then the speed of the shaking will reset to the slowest and the player will get more health. By entering cheats, it is possible for multiple hookers to enter the player's vehicle, and if the service is finished, only the last hooker will get out, and the other hookers will remain until the player gets out, then all the hookers will also exit the vehicle. As long as a vehicle can have occupants other than the player (i.e. helicopters, bikes, and even the Caddy), then hookers can be availed.

In Grand Theft Auto: San Andreas, however, if a hooker approaches the player's car, there is the option to accept or decline her offer to enter the car by simply using the "positive" or "negative" response buttons. Seclusion is now considered the sole factor in order to be able to have "sex", and the hooker can only occupy the seat beside the player. Seclusion now includes paved areas, such as corners, garages, under highways, etc. The effect of "sex" is still the car bouncing up and down (lowering of the vehicle body between the player and the hooker) at three different speeds from slowest to fastest (first by 850 milliseconds each lowering, then 450, then 120), and the camera angle will lower itself slowly, but the player can still pan the camera around the vehicle. However, CJ and the hooker still remains seated. Upon completing the Pimping missions, prostitutes will pay the player instead, possibly serving as a response to the controversy surrounding players killing prostitutes to get their money back in previous GTA games. Some hookers are armed with a Pistol or a Knife, most likely another response to the same controversy. But, even if they have a gun, they will still run away when hearing gunshots - they will only open fire if they're the one getting attacked. Different prostitutes with different voices and personalities are featured, including possibly a "Crying Game" scenario; normally after sex, Carl makes some sort of comment about the experience as the girl exits his vehicle, but sometimes, a different male voice can be heard, which could indicate that Carl's "date" wasn't female, though this could just be a glitch. While the car is shaking, both the hooker and CJ might say random suggestive speech in the PS version (although, only the hooker's mouth is active, while CJ's is completely still). This was broken in the PC version due to a randomizer error. Since seclusion is now considered, when the car shakes at its fastest and anyone which is not a hooker comes near the car, the hooker will stop the service immediately and get out of the car. If, on an occasion that a cop (on foot, or in a squad car) comes near, the hooker will get out of the car and run as if scared, and the player will get a one-star wanted level. Overturning the car will make them get out of the car immediately. Hooker sex still has a healing effect, but the amount of health points cannot get higher than 26 (it can be less if the service is stopped immediately), and there will be no increase of health once the maximum has been reached. Also, the amount of money decrements (or increments after the Pimping mission has been finished), and the health points increment at a fixed rate of 2 per second. There are two lines that can be heard during sex; one is for the normal pleasure lines said by CJ/hooker, and one is when the hooker performs a blowjob. There are hidden lines inside the GXT files pertaining to hooker dialog, suggesting that there could be multiple services that can be availed by the player that was cut. These services are then carried on to later games, such as GTA IV. 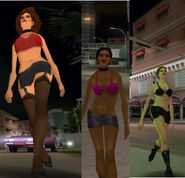 A prostitute in GTA San Andreas.

In Grand Theft Auto IV, the options from GTA San Andreas are replaced with a "yes" button to accept a prostitute's services, otherwise, driving away replaces the "no" button. Different sex acts are also introduced in the game; it costs $20 for a "handjob", it costs $50 for a "blowjob", and it costs $70 for actual sex. You are unable to pick up prostitutes in emergency vehicles, bikes, or a bus, with Niko citing various reasons. One other major change is that the camera angle is not fixed, and more suggestive animations are shown of the sexual acts between the player character and the prostitute, although both Niko and the prostitute will both be fully clothed (the animation is more clearly seen if a convertible is used). Niko also cannot have sex with prostitutes while in emergency vehicles, nor in certain vehicles due to size, saying things like "I bet you're flexible but not in here," or "I think this car is a little too small for that..." (although Niko will still say these quotes even if he's in an emergency vehicle). Most prostitutes are seen in skirts - or shorts - and heels. They sometimes wear hats, and usually have their hair up. There are two distinct NPC models used, a slim (usually Caucasian or Hispanic) version and a busty (usually African-American) version. They all do a little "twist" or "twirl" after watching them stand on the street for a while. They also make dirty comments when having sex, such as "It's so big", which adds to the suggestive content.

In Grand Theft Auto: Chinatown Wars, prostitutes can be seen walking around, but cannot be picked up. In one random encounter, Huang gets ambushed by a group of armed hookers, led by one named Cherie. She claims "Losers like you pay us working girls for a ride, then unload your guns in our faces just to get your filthy money back!", obviously poking fun at the controversy surrounding the feature of killing prostitutes to recollect money in previous games.

In Grand Theft Auto V and Grand Theft Auto Online, prostitute interaction has been further expanded. They are able to be picked up, and appear mostly at night-time. All characters can get three options. From cheapest to most expensive: the first option is a 50$ blowjob, the second option is 70$ full-on intercourse, and the third option is the same as the second option, but for 100$. Unused sound files suggest that the 50$ service was originally meant to be a handjob, although this service, for unknown reasons, did not make it to the full game. Also, prostitute sessions will be longer when in a sports car. Like in GTA IV, Michael, Trevor, Franklin, or the GTA Online Protagonist can buy multiple sessions in one sitting. Some hookers flirt or talk about their past and ask the protagonists to come see her again. Prostitutes' looks have also been altered; all prostitute's now have a cleaner appearance compared to the ones from GTA IV; there is also a greater variety of appearances and voices. When prostitutes stand still, their behaviours include such things as shivering and an apparent lack of steady footing, suggesting discomfort and/or potential substance-abuse problems. They can also be seen smoking. If the player stands near the prostitute for some time, she will ask him to leave. If the player doesn't, she will call the police, resulting in a one star wanted level. The camera angle is now fixed in GTA V, which means that players are unable to move the camera around and get a better view. However, the player is able to switch between the various fixed camera angles. In the enhanced version of GTA V, the player cannot switch between first-person and third-person views. Dialogue and movements by the prostitutes during an encounter are far more sexually explicit than they have been in previous games, in some respects surpassing the explicitness of the infamous Hot Coffee Modification. Some hookers can be seen standing in groups of two or three, and they mostly have a conversation with each other, but can also have a huge fight with each other, with one of them leaving out of embarrassment.

In both GTA IV and GTA V, it is possible for NPCs to pick up a prostitute. However, in GTA IV, they will not do anything and will drive randomly around, and eventually the prostitute will disappear at sunrise. In GTA V, however, the NPC will drive and park in a nearby alleyway and will have sex with the prostitute.

Artwork of a prostitute (on the Social Club site she is named "Young Woman"). 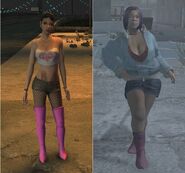 An NPC picking up a prostitute in GTA IV.

Prostitutes near the After Dark Sex & Fetish Shop on Drill Street in Bohan, in GTA IV.

A prostitute in GTA V.

An NPC picking up a prostitute in GTA V.

An NPC and a prostitute in action in GTA V.